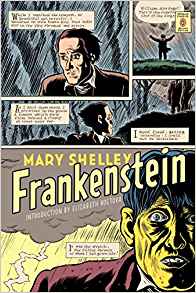 I’ve heard so many myths and tales about Frankenstein, so many people praising this book as one of the greats; in fact, I’d heard so much about this book, I could probably have held a conversation as though I’d read it. This year, I finally read it, and the long and short of it is…. I loved it! I read this book in October, and have struggled to write a review, struggled to follow my usual book review format, so I’ve decided to do what the title of this post says, just talk about this book, some bookish conversational chatter about Frankenstein.

Now a Penguin Classics Deluxe Edition with an introduction by Elizabeth Kostova and cover art by Ghost World creator Daniel Clowes, Mary Shelley’s timeless gothic novel presents the epic battle between man and monster at its greatest literary pitch. In trying to create life, the young student Victor Frankenstein unleashes forces beyond his control, setting into motion a long and tragic chain of events that brings Victor to the very brink of madness. How he tries to destroy his creation, as it destroys everything Victor loves, is a powerful story of love, friendship, scientific hubris, and horror.

I think there are two big misconceptions about Frankenstein, one of which I was aware of, the other I wasn’t. Probably the biggest misconception is the confusion around who Frankenstein is, people often refer to the monster as Frankenstein, when the monster is unnamed, and Victor Frankenstein is actually the scientist who created the monster. The second misconception, that I didn’t know, until I read the Introduction to this novel, written by Elizabeth Kostova, is that there are no bolts in the monster’s neck, this visual came from TV/film – I found that really interesting because all these years, I’ve had this idea of what the monster looks like in head, and it has been incorrect. Interestingly, I don’t find the images of Frankenstein’s monster horrid, the Halloween costumes are some of my favourites, yet if you read this novel, you’ll hear Victor refer to his monster as grotesque; so after reading this book, I now have a completely new visualisation of the monster, the monster is a corpse, not your friendly green giant!

The Introduction to this text is one of the best introductions to a novel I have ever read, because Kostova had me so excited to read the book, already loving it before I’d even begun the story. I read the Penguin Classic Deluxe Edition, the Introduction does contain minor spoilers, so if you want to go into this novel completely ‘blind’, save the Introduction till the end. Some things I found really interesting in the Introduction (besides everything about Mary Shelley’s life): 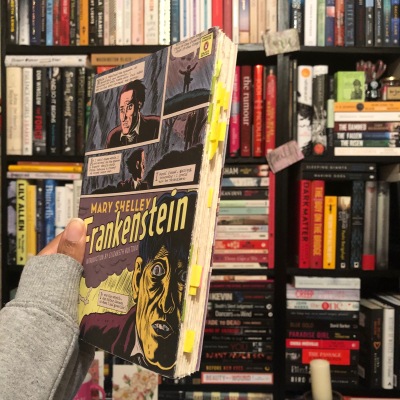 Would I say Frankenstein is one of my favourite books of all time, yes and no. No, because it isn’t the best book I’ve ever read, in fact, I found it quite slow in places, and it doesn’t have the most accessible writing style. Also, it will forever bug me that it is not fully explained how Victor brought his monster to life, although the 1831 text does suggest electricity had a role to play. Although I must say, I love the use of punctuation midsentence.

“Oh! with what a burning gush did hope visit my heart! warm tears filled my eyes, which I hastily wipe away….”

And there were some lines I really loved:

“Having conquered the violence of his feelings, he appeared to despise himself for being a slave to passion; and quelling the dark tyranny of despair.”

There was so much I loved about this book, a lot of which comes from learning a bit about Shelley’s life and seeing certain themes reflected in the novel. Shelley was definitely an eccentric character, and I cannot wait to read a nonfiction account of her life in detail. I find the changes in the 1818 text and the 1831 text so interesting. One of the most interesting themes I found was the debate of fate vs freewill. How much of Victor, and his monster’s, actions were a result of fate, how much say did they have in all that occurred? I read online that the 1831 text is much more critical of Victor’s actions, and leans more toward the idea of fate controlling his actions.

“Destiny was too potent, and her immutable laws had decreed my utter and terrible destruction.”

Whereas, the original 1818 text focuses more on Victor’s actions being those governed by freewill – I haven’t read the 1818 text so I can’t say that with 100% certainty. This argument of fate over freewill massively shifts the perspective of the novel, because it’s essentially arguing that humans have control over good and evil in the world, that humans make things happen, rather than things happen to them. I really want to read the 1818 text to see how/if it changes the overall tone of the book. 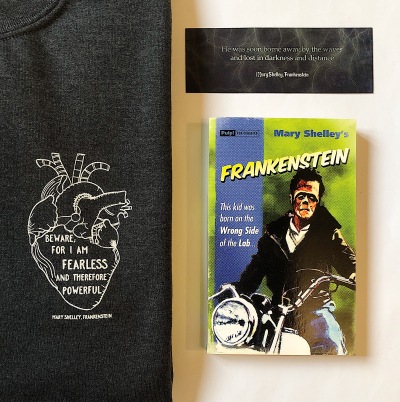 Jumper, bookmark, a second edition – the fandom has begun!

Victor and the monster

I found Victor to be a very fascinating character, in pursuit of greatness, Shelley highlights the dangers of wanting too much, is there such a thing? The idea that there is danger attached to achieving more than you were built for, more than man should ever achieve, should man place limits on himself?

“how dangerous is the acquirement of knowledge and how much happier that man is who believes his native town to be the world, than he who aspires to become greater than his nature will allow.”

There is so much discussion to be had about Victor’s reaction to his monster, was he right or wrong in his actions, how much of what follows is his fault. The monster is equally interesting, and again has a strong fate vs freewill argument attached to its actions. How much of what occurs is his fault vs the fate that was bestowed upon him. There were moments I felt sorry for the monster, and right or wrong, I understood his actions.

“He has abandoned me, and in the bitterness of my heart I cursed him.”

I could talk about this book forever, it’s the perfect book club read, so much social and moral discussion to be had. But I don’t want to venture into spoiler territory, so let me leave it there. Signing off by saying, Frankenstein is a tragic tale, a dark tale, but one very worth your time!

Frankenstein Classic Deluxe Edition is available from: Amazon UK / Wordery / Book Depository (this is the 1831 text, but highlights the text changes) 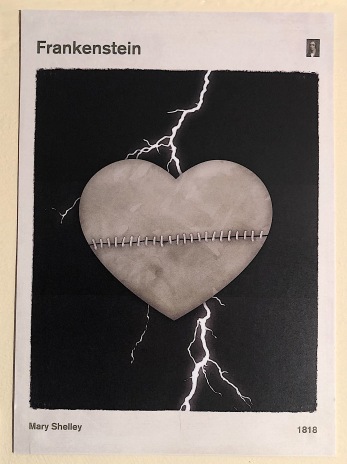 25 thoughts on “Talking about Frankenstein by Mary Shelley”