“The Abominable Book Club contains all the dark magic of a haunted bookshop, summoned directly to your doorstep!”

As Halloween is drawing closer, it’s time to unbox the first ever Abominable Book Club Box. This UK-based horror/thriller box has been creating a whirlwind of excitement on Instagram, and I was lucky enough to be chosen as a rep – this means I received this box for free of charge in exchange for an unboxing, and I was given a discount code for all you wonderful people, so if you like what you see, you can use KEEPER10 for 10% off your first purchase! The cost of this box is £19.99.

In the words of the owners:

“When you sign up for The Abominable Book Club, you will receive a package from us every month, containing our featured book, a locally sourced luxury snack, a handful of hot drinks and a bonus, mysterious, second-hand paperback!”

There were some fantastic little touches to this box that I really like, namely the role of Brother Immanas, chief custodian of The Accursed Library – but, let me not get ahead of myself…

Immediately upon opening the box, I was greeted by this bookmark, with its creepy little tale. The locally sourced snack was Lemon & Black Pepper White Chocolate by The Little Welsh Chocolate Company. And because what’s chocolate without a hot drink to accompany it, some tea and hot chocolate.

Gallery of the Dead by Chris Carter

‘Thirty-seven years in the force, and if I was allowed to choose just one thing to erase from my mind, what’s inside that room would be it.’

That’s what a LAPD Lieutenant tells Detectives Hunter and Garcia of the Ultra Violent Crimes Unit as they arrive at one of the most shocking crime scenes they have ever attended.

In a completely unexpected turn of events, the detectives find themselves joining forces with the FBI to track down a serial killer whose hunting ground sees no borders; a psychopath who loves what he does because to him murder is much more than just killing – it’s an art form.

Welcome to The Gallery of the Dead.

As thrilling as the book sounds, it’s number 9 in the Robert Hunter series. As someone who is a stickler for reading series in order, I’d have preferred a standalone novel or the first in a series. However, what’s so funny about receiving this book is, I bought The Caller, book 8 in this series, when it released, I had no idea it was part of a series at the time, so now I just need to get my hands on books 1-7. I’ve seen this series highly recommend many times, and it’s on my radar to start, so luckily, receiving a book that’s part of a series was okay in the instance.

I know many people read books in series as standalones, especially when the book is about a deranged killer creating art from the bodies of his victims! But, what can I say, I’m a ‘read series in order’ kind of girl!

A Second-hand Book, courtesy of The Accursed Library: 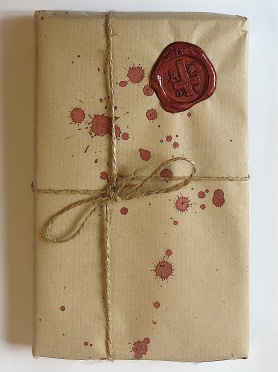 “Brother Immanas, chief custodian of The Accursed Library, has kindly donated books to be included in our boxes this month! To be totally honest we don’t remember agreeing to this, and the packages seem to be stained with something worrying, but nonetheless we hope you enjoy! Brother Immanas was adamant that we include them, and assured us that the faint sound of whispering coming from the packages is TOTALLY NORMAL.”

How incredibly exciting, scary as hell, but exciting! And Brother Immanas is real, my friends, and take a look at the book he picked out for me. Subscribers are encourage to share photos of their book on social media using the hashtag #RelicsOfImmanas.

Image and information about Brother Immanas found on the ‘About Us‘ section of The Abominable Book Club website.

The Survivor by James Herbert

It had been one of the worst crashes in airline history, killing over 300 people and leaving only one survivor. Now the dead were buried and the town of Eton tried to forget. But one man could not rest.

In James Herbert’s The Survivor, Keller walks from the flames of the wreck, driven on by unseen forces, seeking the answer to his own survival. Finally the town is forced to face the shocking, dreadful truth about what was buried in the old graveyard. And a truth Keller did not want to believe . . .

I love the sound of this book, it’s one I don’t already own, in fact, I hadn’t even heard of it before, Brother Immanas chose well! And for a second-hand copy, it’s in good condition too, which I really appreciate.

If you like what you see, and want to get your hands on November’s box, head over to the The Abominable Book Club website and subscribe now, and don’t forget to use KEEPER10 for 10% off your first box. This UK-based box ships worldwide now too!

I’m looking forward to the next month’s box, particularly the book Brother Immanas chooses for me from The Accursed Library!

Find out more about The Abominable Book Club: