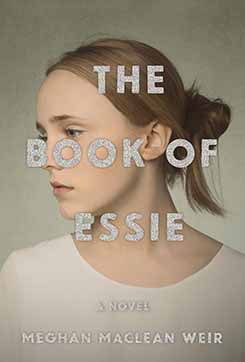 *Thanks for the free book, @aaknopf; it’s my pleasure to be a part of your monthly book send programme and provide honest reviews for the titles chosen*

There’s just something so simple, yet stunning, about this cover. And the writing inside is equally as stunning, The Book of Essie is an intelligent and emotional novel.

A captivating novel of family, fame, and religion that tells the story of the seventeen-year-old daughter of an evangelical preacher, star of the family’s hit reality show, and the secret pregnancy that threatens to blow their entire world apart.

Esther Ann Hicks–Essie–is the youngest child on Six for Hicks, a reality television phenomenon. She’s grown up in the spotlight, both idolized and despised for her family’s fire-and-brimstone brand of faith. When Essie’s mother, Celia, discovers that Essie is pregnant, she arranges an emergency meeting with the show’s producers: Do they sneak Essie out of the country for an abortion? Do they pass the child off as Celia’s? Or do they try to arrange a marriage–and a ratings-blockbuster wedding? Meanwhile, Essie is quietly pairing herself up with Roarke Richards, a senior at her school with a secret of his own to protect. As the newly formed couple attempt to sell their fabricated love story to the media–through exclusive interviews with an infamously conservative reporter named Liberty Bell–Essie finds she has questions of her own: What was the real reason for her older sister leaving home? Who can she trust with the truth about her family? And how much is she willing to sacrifice to win her own freedom?

The Book of Essie is a very well-written, emotionally driven, piece of literary fiction. I think this novel will appeal to those who enjoy reading stories centred around cults, because essentially that is what the Hicks family are – a cult, led by mother and father, who put fame and fortune before the wellbeing of their children. This novel will also appeal to readers who enjoy seeing a strong female lead, though young, Essie is brave beyond belief, smart, and in desperate need of escape.

It was brilliant to see the contrast between how people acted off camera, compared to how they acted when the world was watching. I’m sure we’ve all watched reality TV at one point or another, and wondered how things were when the camera wasn’t rolling – are you laughing, when off camera that one character who is overlooked is suffering? In The Book of Essie you are privy to the real truth and the real truth can be ugly, human beings can be ugly, and I don’t just mean unpleasant to look at, I mean ugly at their core.

The plot was a little slow at the beginning but the writing was suspenseful, and engaging, enough to keep me captivated; I begun to make some sinister predictions, because while this novel is beautifully written, it has dark undertones threatening to break through. But, in contrast to the darkness, there was light, and Roarke and Essie’s relationship was the light. The main highlight of this relationship was how it was portrayed, Roarke didn’t swoop in and save Essie, she wasn’t portrayed as a damsel in distress, and I think that was really important, and empowering.

The storyline featuring the reporter, Liberty Bell, was also really interesting, her own history and the reason Essie chose her to aid in showcasing this fabricated love. This novel isn’t without it’s worry, Essie is such an endearing character, one you really come to care about, and as the story progresses you become increasing concerned that people may find out her lie.

The problem with family secrets, private, and public, lies is that the truth will always come out in the end. I highly recommend The Book of Essie, learn Essie’s truth, learn the Hick’s truth, see the ugly, greedy, side of human nature, and see just how much Essie is willing to sacrifice to gain her freedom.

This book is available to by from: Amazon US / Amazon UK / Book Depository

19 thoughts on “Book Review: The Book of Essie: A Novel by Meghan MacLean Weir”