It’s time for another Ninja Book Box unboxing. Ninja Book Box features books from indie publishers across a variety of genres, and source their bookish items from small businesses. This month, the genre was historical fiction, and I love how the book and items have been tailored to the theme of the box. This is a quarterly box, and the only book box I regularly buy*, and I’m always amazed at the creativity that goes into it.

*I received 50% off this box as I am a Ninja Reader (I read a small selection of titles to help decide which books are suitable for the book box and/or book club.)

The theme for May’s box was: Conspiracy by Candlelight

I always love how nicely everything is packaged, and securely too – this is my fourth time receiving their box, and never once has anything arrived damaged. Each box contains two things as standard: firstly, a charm – this month’s charm is scales (conspiracy, scales of justice, I see what you did there). The second staple thing is a Ninja Recipe, this month for Sweet Wine Cakes. Also included is a reminder about the 2018 Summer Reading Box, which will contain three indie books! You can vaguely see in the above photo, a note titled “The pen is mightier than the sword” – in short, it states the items in this box lend themselves to the art of letter writing, and Ninja Book Box are setting up a pen-pal scheme for their ninjas, and to visit the website if you’re interested. Before we begin unwrapping, I love the bookmark, made by Ester Fairbairn, the card is very thick so it’s durable. 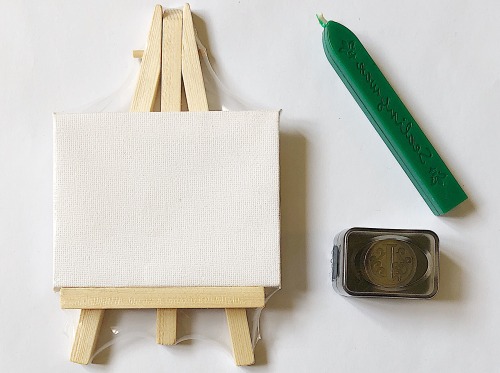 The first item I unwrapped was this mini canvas, a Ninja Book Box original, with the instruction to make a piece of book inspired art, for any book, and share it on social media. I have absolutely no idea what masterpiece to create, so I’ll have to think on this for a little while!

The second item is something I honestly thought I’d never own – from Stomp Stamps, a wax seal kit. This is one of those things you never knew was missing from your life until you received it, and, to make me even more excited, the stamp is the letter J (incase you blindly follow my blog, my name starts with J). Right, who wants a letter? I’ve got my own official seal, I will melt the wax and stamp the stamp!

I know it’s unusual to jump straight to the book before I’ve finished unboxing the gifts, but the next two items will make so much more sense once you know what the book is.

From Duck Overlook – Rivals of the Republic by Annelise Freisenbruch 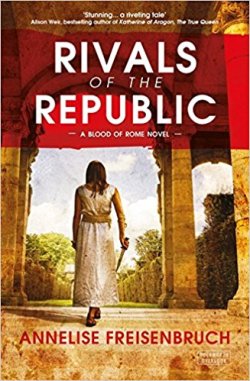 The body of a Vestal Virgin is dragged out of the River Tiber. A senator bleeds to death in his bath. As the authorities turn a blind eye, Hortensia, daughter of the capital’s most celebrated orator, feels compelled to investigate a trail of murders that lead to the dark heart of Rome. Flying in the face of her husband’s and father’s attempts to protect her, rebelling against the constraints imposed upon her sex, she is drawn ever deeper into the corrupt underworld that lurks in the shadows cast by the city s all-powerful elite. When fires begin to rage in the slums and other key witnesses are silenced, only one man can save Hortensia from becoming the next victim of a conspiracy to destroy the Republic: Lucrio, the damaged ex-gladiator to whom she already owes her life. But will the secrets of his own tragic past threaten to subsume them both…

I can heave a sigh of relief, Rivals of the Republic is a book I don’t already own, and one I will read. That’s always the worry with book boxes, isn’t it, that’ll you get a book you already have or one so far out of left field you won’t ever read it. This book is the first in Blood of Rome series, and I love the sound it. You’ve read the synopsis, it contains a murder and a mystery, that speaks to my crime fiction soul! Along with the book is: a spoiler-free review, interview with the author, and a recommended reading list.

Now for the two remaining items, we’ll start with my favourite item of this box.

Instructed to open after the book, from Ester Fairbairn, this gorgeous stationery set. So again I’ll ask, who wants a letter on my fancy writing paper, sealed with my very own wax stamp? The thought that went into the connection between these item was fantastic!

Last up, sourced from various UK based suppliers, an Asterix Comic Book – Asterix at the Olympic Games. I love this! Ninja Book Box state that they are unlikely to feature an item like this again as it’s not independently published and second hand, but like Rivals of the Republic, it’s set in Ancient Rome, and it adds a nice element of humour to the box. I’ve had a quick flick through and I look forward to properly reading this comic and having a few laughs. 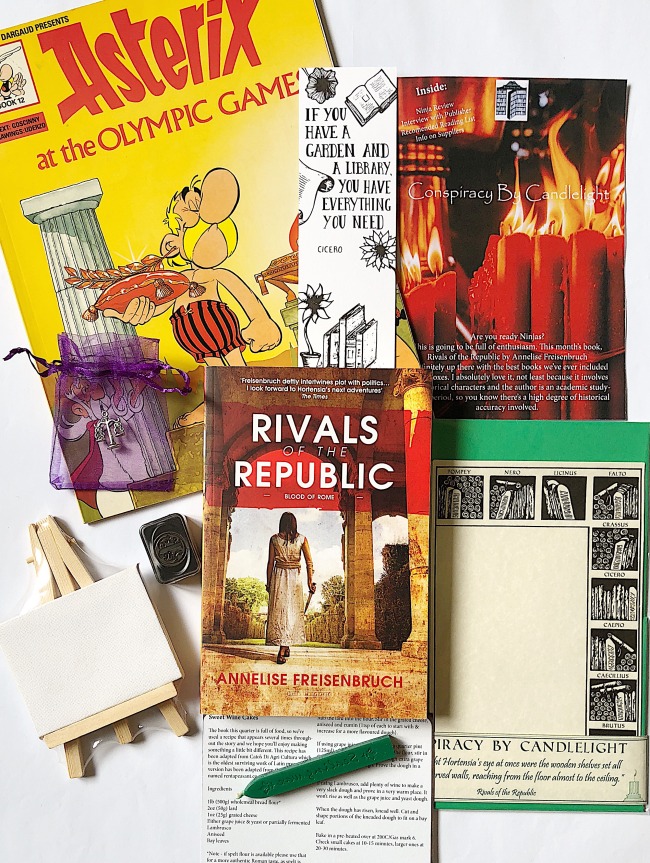 I’m very impressed with the items in this box, and the thought that went into curating it. Everything you need to know about Ninja Book Box can be found on their website: www.ninjabook.box.com

Find them on social media:

Go forth, and discover Ninja Book Box. Don’t forget about the 2018 Summer Reading Box, it’s not part of the subscription, the box will contain three books, so if you favour books over bookish items, it’s worth checking it out.