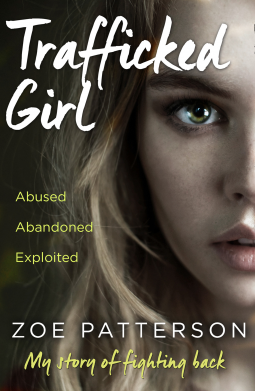 “Abused. Abandoned. Exploited. My Story of Fighting Back”

Please note: this book description and my review may be unsuitable for some readers due to the content. Trigger warnings: domestic violence, child sexual exploitation, child trafficking.

When Zoe was taken into care at the age of 13, she thought she was finally going to escape from the cruel abuse she had suffered throughout her childhood. Then social services placed her in a residential unit known to be ‘a target for prostitution’, and suddenly Zoe’s life was worse than it had ever been before.

Abused and ostracized by her mother, humiliated by her father’s sexual innuendos, physically assaulted and bullied by her eldest brother, even as a young child Zoe thought she deserved the desperately unhappy life she was living.

‘I’ve sharpened a knife for you,’ her mother told her the first time she noticed angry red wounds on her daughter’s arms. And when Zoe didn’t kill herself, her mother gave her whisky, which she drank in the hope that it would dull the miserable, aching loneliness of her life.

One day at school Zoe showed her teacher the livid bruises that were the result of her mother’s latest physical assault and within days she was taken into care.

Zoe had been at Denver House for just three weeks when an older girl asked if she’d like to go to a party, then took her to a house where there were just three men. Zoe was a virgin until that night, when two of the men raped her. Having returned to the residential unit in the early hours of the morning, when she told a member of staff what had happened to her, her social worker made a joke about it, then took her to get the morning-after pill.

For Zoe, the indifference of the staff at the residential unit seemed like further confirmation of what her mother had always told her – she was worthless. Before long, she realised that the only way to survive in the unit was to go to the ‘parties’ the older girls were paid to take her to, drink the drinks, smoke the cannabis and try to blank out what was done to her when she was abused, controlled and trafficked around the country.

No action was taken by the unit’s staff or social workers when Zoe asked for their help, and without anyone to support or protect her, the horrific abuse continued for the next few years, even after she left the unit. But in her heart Zoe was always a fighter. This is the harrowing, yet uplifting story, of how she finally broke free of the abuse and neglect that destroyed her childhood and obtained justice for her years of suffering.

Trafficked Girl comes with quite a lengthy blurb; usually, I don’t like when a blurb details so much about what’s in the book, but here, I think it’s extremely important. The blurb acts as a trigger warning and you need to be aware of the content you will be reading about and decide for yourself if you still want to read this book.

I’ve watched a few documentaries and docudramas about child trafficking rings in the Midlands, but this is the first time I’ve read a first-person account about it, and I majorly underestimated the affect it would have on me. I’ve read some harrowing nonfiction in the past, stories of the wrongfully convicted, people escaping conflicts, etc, but none have ever haunted me the way this subject matter did. I couldn’t sleep after reading this book; I just couldn’t comprehend the failings of staff and services that allowed these things to happen. For me, I’ve learned this is a subject matter, I likely won’t read about again because the feelings of upset and anger I felt were so intense – above my emotional threshold, if you like. I’m not advocating against reading this book, but because of the impact it had on me, I think it’s important to mention the lasting affect this book may have, if you read it. And it’s equally as important to mention, this book does have it’s uplifting moments too.

As for the delivery, Zoe [with the aid of ghostwriter, Jane Smith] takes you through her earliest memories to the present day, it’s personal, emotional and raw. At no point did it feel like anything was being dramaticised; this was a powerfully honest account of Zoe’s experience, living through horrors I can’t even begin to imagine. When I read harrowing books such as this, there is always a point when the pain transcends so viscerally off the page, I have to pause reading and take a minute to reflect on what I’ve read because I know it will stay with me long after finishing the book. The moment in this book was:

“But as the man forced me to my knees, I found myself praying silently, ‘I need you now, Mum. Please, just love me enough to come and rescue me.’”

When you read about Zoe’s life before being taken into care, and then read that above line – I think that shows how truly horrific Zoe’s life became.

Throughout this book, I was appalled, outraged, disappointed and upset at all the professionals involved in Zoe’s care, and it’s truly shocking the failings Zoe experienced and some of the remarks these professionals made, their blatant disregard for Zoe’s welfare – it’s painful to read. Honestly, it makes you weep for humanity – the police, social services, the care home staff, the school system, foster carers, how could everyone get it so wrong!?

I read this book it one sitting because I was adamant I would not stop reading until Zoe was in a better, safer place. Her strength, an inner strength that at times she didn’t even know she possessed, was incredible; consciously, and unconsciously, her will to survive was her saving grace; and years later, when she meet Pam, she could finally begin to heal. I’m not going to minimise what happened to Zoe, she recognises, as will the reader, that what she experienced has far reaching consequences and will impact the rest of her life. But, in order to move forward, you have to, somehow, find a way to live with all that you’ve experienced and build a future for yourself, and to see Zoe doing that brought tears to my eyes because if anyone deserves a chance at “normality”, it’s Zoe. Yes, there’s no denying this is a harrowing read, but Zoe also talks about overcoming alcohol dependency, obtaining justice from the system that failed her so miserably, gaining employment, living independently and pursuing her dreams – fighting back!