I’m delighted to be a part of the blog blitz for Betsy Reavley’s latest novel. I absolutely loved Frailty, so I was excited to read this one.

When the submarine departed, none of the ten people on board knew it would turn into a nightmare.

Trapped on the sunken vessel and unable to escape, one of them is discovered dead. The tension escalates as the survivors realise there is a murderer among them, who is preparing to strike again and again…

With mounting desperation, people begin to turn on each other. While they struggle to identify who is responsible, each must contend with their own past and the secrets they are hiding.

But who is who?  And which of them will be next to die?

There’s nowhere to run, and you’re trapped in a submarine with a killer, and then the first body is found… You immediately know this is going to be a murderous read; surely, it’s safer to stay with the group, but anyone could be the killer – how do you survive? That is the dilemma facing those trapped in the submarine. This novel unfolds with the events on the submarine, but also how each of the ten characters came to be onboard.

Most interesting, for me, was the narration of an unknown child, interspersed throughout. Trying to figure out who this child was because you’re 99% sure they’re trapped in the submarine as an adult and killing off people one by one. After the first murder, I thought I had it all figured out, but as you hear from each character, it seems they all have a motive to kill. Despite getting snippets from all ten characters, the plot is easy to follow, mainly because the main narration takes place in one location (the submarine) so this minimises the possibility for confusion.

One of the features this novel has, that I really like, is unlikeable characters – and I’m not talking about just one, there are multiple characters to dislike! And the unlikeability came very early on for one of the characters, it completely blindsided me and let me know that this would be a dark read – I can’t say I shed a tear at this character’s fate.

When I first started reading this novel, it took me a while to get into the plot; it’s very different to Frailty, and not necessarily a case of “if you like one, you’ll like the other.” Pressure reminded me of those “slasher-style” horror films but in book form; a group of people trapped together with no way out and they (and you, the reader) have to guess the killer before every dies. If you’re looking for a quick and fun read, in a claustrophobic setting, Pressure may be the book for you.

Author of  The Quiet Ones, The Optician’s Wife,  Frailty, Carrion, Beneath the Watery Moon and the poetry collection The Worm in the Bottle. Betsy was born in Hammersmith, London. As a child she moved around frequently with her family, spending time in London, Provence, Tuscany, Gloucestershire and Cambridgeshire. She showed a flair for literature and writing from a young age and had a particular interest in poetry, of which she was a prolific consumer and producer.

In her early twenties she moved to Oxford, where she would eventually meet her husband. During her time in Oxford her interests turned from poetry to novels and she began to develop her own unique style of psychological thriller. Betsy says “I believe people are at their most fascinating when they are faced by the dark side of life. This is what I like to write about.” Betsy Reavley currently lives in London, with her husband, 2 children, dog, cat and chickens. You can follow her on Twitter @BetsyReavley 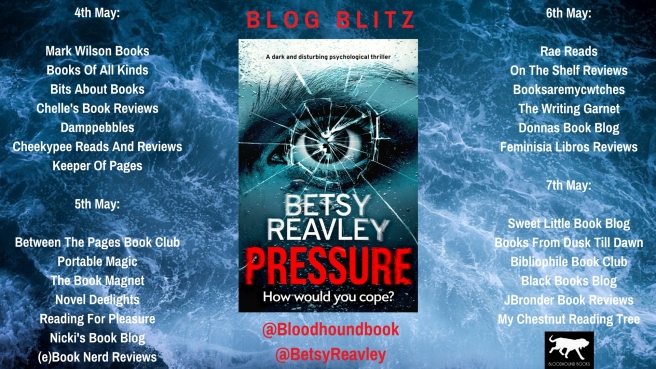 😍📖⁣⁣
📖 ⁣
Where would your latest read take you?⁣
📚 ⁣
Oh #bookish gods⁣
What’s one of your recent #bookish achievements?⁣
My Tweets