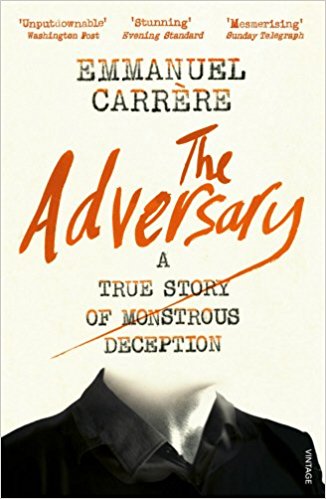 Thank you to Eva @ Novel Deelights for suggesting we buddy reading this book; I’m so glad it wasn’t left unread on my shelf because it contains the greatest act of deception I have ever read about in a true crime book!

ON THE SATURDAY MORNING OF JANUARY 9, 1993, WHILE JEAN CLAUDE ROMAND WAS KILLING HIS WIFE AND CHILDREN, I WAS WITH MINE IN A PARENT-TEACHER MEETING…

With these chilling first words, acclaimed master of psychological suspense, Emmanuel Carrère, begins his exploration of the double life of a respectable doctor, eighteen years of lies, five murders, and the extremes to which ordinary people can go.

The case of Jean-Claude Romand is one I hadn’t heard of before, so everything I learned in this book was new information to me. Romand was a narcissistic liar, who deceived everyone for eighteen years before committing murder.

This is nonfiction, but it almost suspends belief – I was so engrossed in this read, when you read about the life of Romand, you’ll understand why. I’m purposely not telling you exactly what all the lies were because I think it’s a much more powerful read if you discover them while reading the book. If this was fiction, I’d have described this plot as “lacking in believability” – but here, it was fascinating. Don’t mistake my fascination to mean I’m raising Romand to celebrity status, it’s more a case of, even after finishing this book, I just keep think back over all the deceit, trying to understand how it was possible, surely no one is that skilled in the art of deception. I was racking my brain trying to understand how Romand wasn’t caught out in all his lies; and we’re not talking about little lies, we’re taking about MAJOR lies – the phrase “you sit on a throne of lies” was invented for this man!

I really liked the narrative voice adopted by Carrère, he writes that he was drawn to this case due to a desire to know what went on in Romand’s head during those years of deception, how was he spending his days while pretending to the world he was at work, for example. He didn’t want to conduct an investigation; Romand’s guilt/innocence is not up for debate; and as disturbed as the author was by this case, he knew that contacting Romand was the only way to get answers. I suppose, I really liked the way Carrère chose to write this book because I, too, wanted to know what was going on in Romand’s head.

At under 200 pages, this is a quick read that I recommend to fans of true crime.

20 thoughts on “#Nonfiction Book Review: The Adversary: A True Story of Monstrous Deception by Emmanuel Carrère”