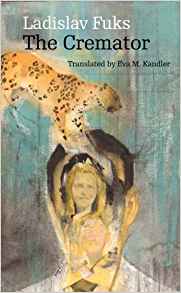 The theme for this month’s Book Bum Club is ‘Short and Sweet’ – read a book under two hundred pages – I chose to read The Cremator, a horror novel.

“The devil’s neatest trick is to persuade us that he doesn’t exist.” Giovanni Papini.

It is a maxim that both rings true in our contemporary world and pervades this tragicomic novel of anxiety and evil set amid the horrors of World War II. As a gay man living in a totalitarian, patriarchal society, noted Czech writer Ladislav Fuks identified with the tragic fate of his Jewish countrymen during the Holocaust. The Cremator arises from that shared experience. Fuks presents a grotesque, dystopian world in which a dutiful father, following the strict logic of his time, liberates the souls of his loved ones by destroying their bodies first the dead, then the living. As we watch this very human character a character who never ceases to believe that he is doing good become possessed by an inhuman ideology, the evil that initially permeates the novel’s atmosphere concretizes in this familiar family man. A study of the totalitarian mindset with stunning resonance for today, The Cremator is a disturbing, powerful work of literary horror.

Well, The Cremator was certainly an interesting read. Mr Kopfrkingl is an interesting character, not wholly unlikeable to begin with, wanting the best for his family and is troubled by the cruelty that exists in the world. He works in a crematorium and views his job as way of relieving people’s suffering and allowing them eternal peace, as there is no suffering once your body has returned to ashes. However, as time progresses he succumbs to the Nazi ideology of his friend, and a cremator is the perfect occupation to dispose of those who do not fit with his new way of thinking.

Fuks has such a unique narration style, I’m not even sure I could describe it, so I’m going to go with the blurbs description – it’s tragicomic (manifesting both tragic and comic aspects). This is a horror novel, but horror in an almost satirical fashion. Out of context, I would say this novel gives food-for-thought on one man’s decent into madness. It was only once I’d read the ‘Afterword’ at the end of the novel, and placed what I’d just read in its proper historical context, was I able to appreciate fully what Fuks has created. I was able to match the characters and ideas present in this novel to the historical and political time in which it’s set, and while this novel was still one man’s descent into madness, it became so much more than that.

I enjoyed this novel, particularly because I really liked the narration style; I have no illusions that it will appeal to everyone, especially as the narration can be very repetitive at times. The plot itself is lucid, showing in a simple manner how Mr Kopfrkingl succumbed to the Nazi regime. Disturbing in its simplicity, The Cremator is a horror novel unlike none I’ve read before – a good and quick read, made even more powerful by the ‘Afterword.’