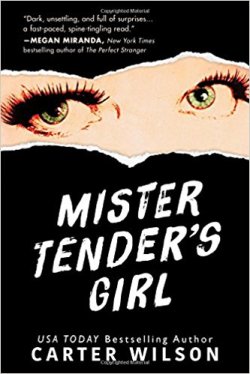 How far are you willing to go for Mister Tender? At fourteen, Alice Hill was viciously attacked by two of her classmates and left to die. The teens claim she was a sacrifice for a man called Mister Tender, but that could never be true: Mister Tender doesn’t exist. His sinister character is pop-culture fiction, created by Alice’s own father in a series of popular graphic novels. Over a decade later, Alice has changed her name and is trying to heal. But someone is watching her. They know more about Alice than any stranger could: her scars, her fears, and the secrets she keeps locked away. She can try to escape her past, but Mister Tender is never far behind. He will come with a smile that seduces, and a dark whisper in her ear… Inspired by the Slender Man crime, this gripping thriller plunges you into a world of haunting memories and unseen threats, leaving you guessing until the harrowing end.

Mister Tender’s Girl is a fast-paced and thrilling read; I only meant to read the first 100 or so pages before running some errands, but this novel got my adrenaline rushing and I ending up reading it all in one-sitting! Isn’t it fantastic when a book exceeds all your expectations!?

“It’s just a book that shouldn’t exist and probably came from Hell.”

The dark humour mixed up in this plot just added to the excitement. But where the real thrills came from where the characters. Thomas, Alice’s brother, was a character you were wary of; not necessarily because you thought he was against Alice but because he appeared so unstable at times. But in comparison to their mother, he was an angel. I loved the family drama! And don’t even get me started on those creepy-ass Glassin twins!

“There’s a real skill in deftly feigning emotions where none exist. I believe it’s called psychopathy.”

Mister Tender’s Girl was so much fun to read. Alice was ultra-likeable, and I was firmly in her corner when she decided it was time to lay her past to rest once and for all. The thought alone of being stalked is disturbing, without, you know, almost being stabbed to death at 14! Yes, you detect a hint of jest in my writing, because as disturbing as the events that occurred in this novel were, it read as a light-hearted thriller – the theme was dark, but the tone was light, and that’s what makes this novel read so fluidly and allows you to devour it in one-sitting. As fun as this book was to read, it wouldn’t be fair if I didn’t mention, it does get a little gory at times.

Overall, I appreciated the originality of this novel. However, the ending didn’t quite fit with the tone of the novel, it was good, but it seemed the originality which I so loved, was lost. Nonetheless, I would still firmly place this novel among those I loved and would highly recommend.