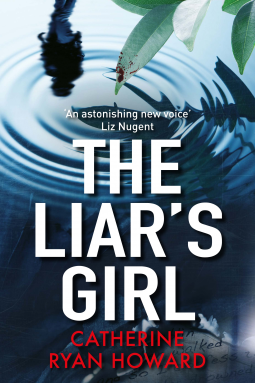 Happy publication day to Catherine Ryan Howard, The Liar’s Girl is out today.

Her first love confessed to five murders. But the truth was so much worse.

Dublin’s notorious Canal Killer, Will Hurley, is ten years into his life sentence when the body of a young woman is fished out of the Grand Canal. Though detectives suspect they are dealing with a copycat, they turn to Will for help. He claims he has the information the police need, but will only give it to one person – the girl he was dating when he committed his horrific crimes.

Alison Smith has spent the last decade abroad, putting her shattered life in Ireland far behind her. But when she gets a request from Dublin imploring her to help prevent another senseless murder, she is pulled back to face the past – and the man – she’s worked so hard to forget.

After loving Ryan Howard’s previous novel, Distress Signals, I knew I’d be picking up her next novel – and I’m so glad I did because it’s a good one! If you’ve read any reviews for The Liar’s Girl, then you’ll know this is one of those plots that the less you know going in, the better. What you do need to know about this novel is, it gets better with each page you turn – the mystery slowly builds and before you know it, you’re hooked.

Told in alternating Then and Now timelines, we get Alison’s point of view at university when the murders first happened, and in the present day when another body is found. Why is this mystery so good, because it’s unsolvable by the reader – Will has been behind bars for 10 years so your number one suspect is instantly ruled out.

The contrast between who Alison is now compared to the girl she was 10 years ago is worlds apart, and I love how skilled Ryan Howard’s characterisation is because it’s almost like two different characters – the naïve university student and the mature [but affected by her past] women – and I love when you can believe the girl from 10 years ago would grow into the woman today because it adds believability to what you’re reading. While there’s no denying how well Alison’s character was written, Will was my favourite because every time he featured, I’d try my hardest to get a read on his character, whether I believe him or if he’s just a really good actor.

The Liar’s Girl is a slow burner, less pacy than Distress Signals, but equally gripping because the intrigue is there – the want to know what happened then, and what is happening now. And this novel isn’t without it’s reveals either – I thought the conclusion was very clever, wrapping everything up in a very satisfying ending.

I absolutely recommend The Liar’s Girl, and look forward to seeing what Ryan Howard writes next  because I, for sure, will be reading it!

⁣ QOTD: How do you ‘#bookstagram’?⁣ ⁣ Do you set aside time each day for it? Do you stockpile photos? Draft your weeks posts?⁣ ⁣ I’ve lost my routine, I work such crazy hours, it’s difficult to find time. When I do have free time, I want to read, instead of talking about reading lol. I don’t think that’s a bad thing, yes my engagement in posts has suffered but I’m coming to terms with it lol. I’ve read some amazing books lately, and that trumps engagement.⁣ ⁣ Although, I do admit, it’s sucks when you’re proud of a post, or put in a lot of effort, and the post just tanks 🙈😂.⁣ ⁣ Let me know, are you living your best bookstagram life at the moment?
#Fantasy⁣ But a different kind of fantasy to what I’m used to! Usually my fantasy reads involve dragons, swords and battles.⁣ ⁣ The Belles by Dhonielle Clayton [gifted by @gollancz] is set in a world where the Belles control beauty, they can make you ‘perfect’. But beauty has a price. What would you give to be beautiful?⁣ ⁣ I’m half way through this one, and I’m loving it. It’s a different worldbuilding to what I’m used to but I’m all for it. The plot is just heating up, like some twisted fairy tale of a desire for perfection but you just know it’s going to come at a great cost!⁣ ⁣ QOTD: what’s the last book you read that was outside your norm? Or do you remain within your comfort reading zone? . . . . #bookstagram #currentlyreading #thebelles #dhonielleclayton #fantasybooks #bookstagrammer #keeperofpages #bibliophilelife #diversereads #bookreviewer
..⁣ February: A backlist book of an author you have read before.⁣ ⁣ Book 1: The Unseeing by Anna Mozzola⁣ ⁣ Set in London in 1837, Sarah Gale, a seamstress and mother, sentenced to hang for her role in the murder of Hannah Brown. During her petition for mercy, Sarah remains silent. Why, what is she willing to die for?⁣ ⁣ (Previously read The Story Keeper)⁣ ➖⁣ Book 2: The Good People by Hannah Kent⁣ ⁣ County Kerry, Ireland, 1825.⁣ Nóra, bereft after the sudden death of her beloved husband, finds herself alone and caring for her young grandson Micheál. Micheál cannot speak and cannot walk and Nóra is desperate to know what is wrong with him. What happened to the healthy, happy grandson she met when her daughter was still alive? In the hope of restoring Micheál, the world of folklore and belief, of ritual and stories, lead her down a dangerous path.⁣ ⁣ (Previously read Burial Rites)⁣ ➖⁣ Both books are based on/inspired by true stories, both emotionally engaging and well thought out. The Good People is slow in pace, but worth your time, and I was surprised by how emotional I was at the end of reading. The Unseeing is perfect for historical crime fiction fans, an addictive read.⁣ ➖⁣ #jesandrosiesbooketlist hosted by @jesikasbookshelf & @rosie_tinted_books
#bookstagram, you all know how much I love a #readalong, so what better way to start off February than with one 😃 Over the next 4 days I’ll be reading The Poison Garden by Alex Marwood with the lovely #bookstagrammers tagged in the photo!⁣ ⁣ I really enjoyed Marwood’s previous book, The Wicked Girls, so I’m excited for this one - I’m already 100 pages in and hooked!⁣ ⁣ Romy has escaped a cult, but can she escape her dark past!⁣ ⁣ #ThePoisonGarden is out already, so if you have a copy, let me know and do join in! The schedule we’re reading to is:⁣ 1st Feb - start to page 100⁣ 2nd Feb - page 101 to 203⁣ 3rd Feb - page 204 to 287⁣ 4th Feb - page 288 to the end.⁣ ⁣ Thank you to @tandemcollectiveuk for sending me a copy of this book and organising the readalong!⁣ #ThePoisonGardenReadalong
Girl, Woman, Other⁣⁣ I’m closing January by finishing this beauty.⁣ GWO follows a cast of twelve characters -mostly Black British women- on their personal journeys. ⁣⁣ Bernardine Evaristo has written such a readable book, with its unique structure, it just flows. Yet the distinction between each character’s voice is clear, without altering the fluidity of the read.⁣⁣ ⁣⁣ I really like the links between the characters. Some are more personally relatable than others (so were my fav - Carole and LaTisha), however, I haven’t come across any character who I haven’t enjoyed reading about. I may not find them likeable but I remain interested.⁣⁣ ⁣⁣ Do you ever “people watch”. You see someone and wonder what their life is like. I think this book is a bit like that, almost as though people in the street have stopped and shared a bit of themselves and then we move onto the next person. To the extent where their pain/trauma isn’t fully explore, nor their successes, you just get the essence of who they are. The idea that you don’t know what the next person has experienced/is experiencing.⁣⁣ ⁣⁣ How happy am I that I have another of Evaristo’s books on my shelf, waiting for me to get lost in!⁣⁣
To all those people who said stick with The Dark Tower series, don’t judge it by book one, it gets so much better - you all were right!!!!!⁣ ⁣ The Drawing of the Three was so much better than The Gunslinger. Although I suspect there’s so much more to come with this series - still five books left to go! And I’m loving this journey with my #KeeperOfKing crew!!⁣ ⁣ Having now finished book two, I see how The Gunslinger laid the foundation, and I now appreciate it more!⁣ ⁣ My evening plans: to start book three - The Waste Lands.⁣ ⁣ QOTD: what book are you reading this evening?
My Tweets