I’m linking up again with Tina @ Reading Between the Pages to look ahead at the books I’d like to read in February. Like last month, I’ll be keeping the list small, so let’s take a look at the contenders. 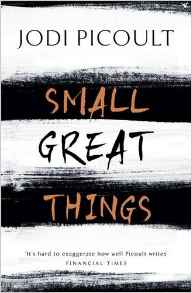 Ruth Jefferson is a labor and delivery nurse at a Connecticut hospital with more than twenty years’ experience. During her shift, Ruth begins a routine checkup on a newborn, only to be told a few minutes later that she’s been reassigned to another patient. The parents are white supremacists and don’t want Ruth, who is African American, to touch their child. The hospital complies with their request, but the next day, the baby goes into cardiac distress while Ruth is alone in the nursery. Does she obey orders or does she intervene?

Ruth hesitates before performing CPR and, as a result, is charged with a serious crime. Kennedy McQuarrie, a white public defender, takes her case but gives unexpected advice: Kennedy insists that mentioning race in the courtroom is not a winning strategy. Conflicted by Kennedy’s counsel, Ruth tries to keep life as normal as possible for her family—especially her teenage son—as the case becomes a media sensation. As the trial moves forward, Ruth and Kennedy must gain each other’s trust, and come to see that what they’ve been taught their whole lives about others—and themselves—might be wrong.

Crime reporter Henning Juul thought his life was over when his young son was murdered. But that was only the beginning…

Determined to find his son’s killer, Henning doggedly follows an increasingly dangerous trail, where dark hands from the past emerge to threaten everything. His ex-wife Nora is pregnant with another man’s child, his sister Trine is implicated in the fire that killed his son and, with everyone he thought he could trust seemingly hiding something, Henning has nothing to lose … except his own life.

Packed with tension and unexpected twists, Killed is the long-awaited finale of one of the darkest, most chilling and emotive series you may ever read. Someone will be killed. But who?

Dublin’s notorious Canal Killer, Will Hurley, is ten years into his life sentence when the body of a young woman is fished out of the Grand Canal. Though detectives suspect they are dealing with a copycat, they turn to Will for help. He claims he has the information the police need, but will only give it to one person – the girl he was dating when he committed his horrific crimes.

Alison Smith has spent the last decade abroad, putting her shattered life in Ireland far behind her. But when she gets a request from Dublin imploring her to help prevent another senseless murder, she is pulled back to face the past – and the man – she’s worked so hard to forget.

Keller Baye and Rebecca Brown live on different sides of the Atlantic. Until she falls in love with him, Rebecca knows nothing of Keller. But he’s known about her for a very long time, and now he wants to destroy her.

This is the story of two families. One living under the threat of execution in North Carolina. The other caught up in a dark mystery in the Scottish Highlands. The families’ paths are destined to cross. But why? And can anything save them when that happens?

The Binding Song by Elodie Harper

Dr Janet Palmer is the new lead psychologist at HMP Halvergate in a remote, bleak area of Norfolk. At first, she was excited by the promotion. Then she starts to see how many secrets are hiding behind the high walls.

A string of inmates have committed suicide, leaving no reasons why, and her predecessor has disappeared – along with his notes. The staff are hostile, the threat of violence is ever-present, and there are rumours of an eyeless woman stalking the corridors, punishing the inmates for their sins.

Janet is determined to find out what is really going on. But the longer she stays and the deeper she digs, the more uncertain she feels.

Halvergate is haunted by something. But it may be a terror worse than ghosts…

Obviously the book selected for my book club!

Into the Black Nowhere (Unsub #2) by Mega Gardiner

And some other books I’d like to squeeze in…

Those are the hopefuls, I’ve not decided what my non-fiction book for this month will be yet.

So, come tell me, what’s on your TBR this month, are we reading any of the same books?

Oh #bookish gods⁣
What’s one of your recent #bookish achievements?⁣
“You may not be able to judge a book by its cover, but you can certainly judge a person by their books.” - True or False?⁣
⭐️ Book Feature ⭐️⁣
🎧 📖⁣⁣
📖 ⁣
My Tweets