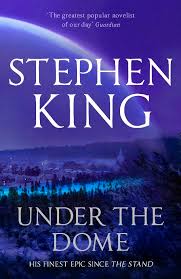 My first big book of the year was indeed an epic one!

In UNDER THE DOME, King has produced another riveting masterpiece. The end of every chapter hooks you into the next, drawing you inside a psychological drama that is so rich, you don’t read it, you live it.

It is the story of the small town of Chester’s Mill, Maine which is inexplicably and suddenly sealed off from the rest of the world by an invisible force field. No one can get in and no one can get out.

The normal rules of society are suddenly changed and when food, electricity and water run short, the community begins to crumble. As a new and more sinister social order develops, Dale Barbara, Iraq veteran, teams up with a handful of intrepid citizens to fight against the corruption that is sweeping through the town and to try to discover the source of the Dome before it is too late . . .

Wow, what an epic read! Where do I even begin when there’s so much awesomeness in one book? How about with the accuracy of the following statement – “you don’t read it, you live it.” At over 800 pages, I split this this book into four parts, and read a bit each week, and each week I basically lived under the dome too, such was King’s ability to transport me to the setting of this novel. I won’t even attempt to take you through the events that occur because a lot goes down under the dome.

Instead, I’d like to focus for a minute on the characters – damn, does King know how to make you love and hate. King introduces you to many characters in this novel, some more memorable than others, and probably far to many are introduced far too soon. But, that doesn’t matter for two reasons; firstly, you remember those you need to, and secondly, when King mentions a secondary character, you are able to recall their subplot easily. That can only be attributed to King’s masterful storytelling. Prior to reading this novel, I did watch the first season of the TV series, so it was somewhat easier for me to remember the characters as I could literally put a face to the name; in the hardback edition I read, there’s a table of “who’s who” at the beginning, that you could refer back to if need be.

As you read this book, you’ll divide the town into two halves, the good, headed up by Dale “Barbie” Barbara and Julia Shumway, instantly likeable and you root for them from the very beginning. Then there’s “the baddies”, led by Jim Rennie, and what a horrid bunch him and his lot are! Until meeting Jim Rennie, I have never actively thought out many painful deaths, I’d like a character to meet. There’s no denying, however, that he makes this novel what it is, he gives you someone to focus all your anger on, and when you meet his son and his “recruits”, actually, you can spread that anger far and wide.

There were so many discussion-worthy points in this novel, some completely unpredictable, some you saw coming but loved anyway. There was also so much wonder, for example, the pink stars falling. What I will say is, I think this is one of those novels that you will know very early on if you like it because the writing and plot style is consistent throughout. Personally, I love when an author tells you, in one intriguing sentence, a little bit of what’s going to happen later on in the plot, it makes me excited to see how and why it happens. Under the Dome consists of many subplots, and I won’t deny, there’s A LOT going on, it’s ambitious, but it 100% works!

My only worry while reading this novel was, I loved it so much, I was worried about the ending, how do you end a story so epically told? While I won’t tell you how this one ends, obviously, I will tell you that King ties up every loose end you care about, including the fate of every character you care [or don’t care] about.

Do I recommend Under the Dome? To any, and everyone, read it!

30 thoughts on “Book Review: Under the Dome by Stephen King”