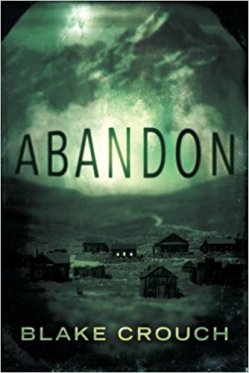 Abandon was Criminally Good Book Club’s December pick; my only read by Crouch prior to this was Dark Matter, which I loved, so I was excited to read another of his books.

On Christmas Day in 1893, every man, woman, and child in a remote gold-mining town disappeared, belongings forsaken, meals left to freeze in vacant cabins—and not a single bone was ever found.

One hundred sixteen years later, two backcountry guides are hired by a history professor and his journalist daughter to lead them to the abandoned mining town so they can learn what happened. Recently, a similar party had also attempted to explore the town and was never heard from again. Now the area is believed to be haunted. This crew is about to discover, twenty miles from civilization with a blizzard bearing down, that they are not alone, and the past is very much alive.

Abandon has alternating timelines. One set in the present day (2009), Abigail – a journalist, and her father, Lawrence – a history professor, along with their two guides and a couple, who are paranormal photographers, visit and explore the town of Abandon. Little do they know, the town may have vanished, but it left a lot behind, and others are coming to claim it. What follows in the present-day timeline is a story of survival and escape, which would likely appeal to readers who enjoy adventure novels set in remote locations, where the characters are not only fighting for their survival but battling the elements – in this case, snow and blizzards so dangerous they could kill. This was my favourite of the two timelines because I enjoyed the urgency involved in the survival and I love novels when the characters have to survive nature’s deadly weapons.

Parallel to this timeline, we have the narrative set in 1893, which tells you what happened to the town of Abandon. This started off interesting to me, but over the course of the book, I felt this narrative was being somewhat dragged out in order to keep the novel having these alternating timelines, as oppose to building on the tension and suspense of the novel.

There were a few standout characters for me in this one, not necessarily likeable, but I liked them – one being Abigail, even though my belief was pushed to the limits at her constant ‘good luck’ but also the two guides, I think they were very well written characters.

There were one or two surprises along the way in this novel but no earth shattering twists, I think this novel is very much about the adventure and the fight for survival. If you chose to read this one, please don’t go into it thinking you’ll get a similar read to Dark Matter, because you will be disappointed – Abandon isn’t as fast-paced or thrilling, it is very much an adventure novel with a mystery at its core. A mystery I did enjoy, especially the latter stages because I think the ending was fantastic! Fantastic because it was unexpected, and I love when a novel blindsides me, I had it in my head exactly how this novel would end and Crouch went with a totally different ending that was better than the one I thought was coming.

My only real issue with this novel was its length, I’m not sure that it needed to be quite so long, and I feel if the 1893 timeline was told in fewer chapters the momentum that was building would have had a greater impact, but instead the novel slowed in places and that took away from my enjoyment. As a whole, I enjoyed this novel and I’m looking forward to reading more from Crouch.

This book is available to buy from Amazon UK / Book Depository