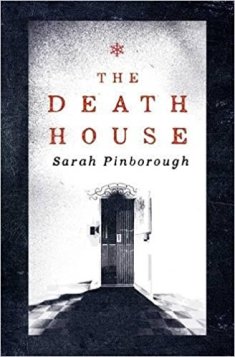 After loving Behind Her Eyes by Pinborough, I jumped at the chance to read another of her novels – a massive thank you to Zuky @ BookBum for lending me her copy of this one.

This is an exceptional, contemporary, heart-breaking novel.

Toby’s life was perfectly normal . . . until it was unravelled by something as simple as a blood test.

Taken from his family, Toby now lives in the Death House; an out-of-time existence far from the modern world, where he, and the others who live there, are studied by Matron and her team of nurses. They’re looking for any sign of sickness. Any sign of their wards changing. Any sign that it’s time to take them to the sanatorium.

It’s worth mentioning, before I started this novel I didn’t realise it was young adult fiction, it was only after reading a few chapters, I thought “hmm, this has got a real YA feel to it” – that’s not a bad thing, it actually made me a little excited because YA is not a genre I often read as it can be so ‘hit and miss’ for me, but I was enjoying this one so I predicted another ‘hit.’ However, I did also realise that this novel wouldn’t get as dark and disturbed as I was anticipating; that’s my own fault and I don’t hold that against this novel, but this novel wasn’t what I was expecting in more ways than that alone…

All the areas of interest to me weren’t explored in the way I hoped, the children and teenagers that live in this house are all Defectives and once the signs are evident that they are sick, they are taken to the sanatorium. I was hoping for a bigger exploration of this sickness, for example, what happens when you’re taken to the sanatorium, is Matron really as evil as Toby thinks? And there’s a situation with one of the nurses that wasn’t concluded, and I really, really wanted to know what happened. There were several major points left unanswered and that bugged me but all the elements I was interested in were secondary to the main plot.

But more than that, I felt the blurb and the cover, misled me into thinking the sickness itself would play a bigger role in the novel, but it is more a fear hanging over the characters and, in my opinion, what this novel really is, is a YA love story, which I suppose is why this novel is described as “beautiful” and “full of heart” but I was hoping for much more dystopian-ness.

If I knew prior to reading this novel that it was a YA novel, I still would have picked it up based on the cover and blurb but as far as recommending it goes, I’d say if you’re a fan of YA novels with a heavy influence of YA love under the shade of a melancholy atmosphere, give this one a go, otherwise, maybe don’t.

This novel certainly carries a melancholy mood and that was my favourite thing about it, the atmosphere, this sense of lingering dread was what kept me turning pages, however, unfortunately, it didn’t manifest into what I hoped – for me The Death House was a case of right book, wrong reader.

14 thoughts on “Book Review: The Death House by Sarah Pinborough”