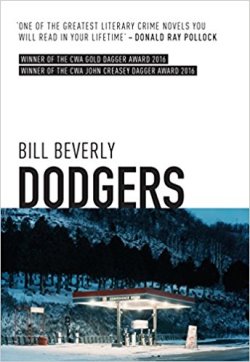 After reading Annie’s review of Dodgers last year, I’ve been meaning to read it; I finally acquired a copy from the library. This was a very welcomed and refreshing read!

When East, a low-level lookout for a Los Angeles drug organisation, loses his watch house in a police raid, his boss recruits him for a very different job: a road trip – straight down the middle of white, rural America – to assassinate a judge in Wisconsin.

Having no choice, East and a crew of untested boys – including his trigger-happy younger brother, Ty – leave the only home they’ve ever known in a nondescript blue van, with a roll of cash, a map and a gun they shouldn’t have.

Along the way, the country surprises East. The blood on his hands isn’t the blood he expects. And he reaches places where only he can decide which way to go – or which person to become. By way of The Wire and in the spirit of Scott Smith’s A Simple Plan and Richard Price’s Clockers, Dodgers is itself something entirely original: a gripping literary crime novel with a compact cast whose intimate story opens up to become a reflection on the nature of belonging and reinvention.

Ah, what a breath of fresh air this novel was! It’s not often I read a book were the characters embark on a road-trip but likening this to The Wire made it very appealing to me. Dodgers is a crime novel with a very strong coming-of-age element. As East travels across states, he is focused on completing “the mission,” but along the way he is forced to re-evaluate his life and decide the direction of his future.

Dodgers is a film waiting to be made! Likening Dodgers to The Wire was spot on because it reminded me of season 4 (I think that’s the one – it focused on the younger gang members); they struggle in school and everyone thinks they’re never going to amount to anything, the simplest math problem is beyond them but when you rephrase the question – the whole sale cost of drugs vs the street value and the interest on loans and payment to the parties involves, you realise they can solve the most complex math problems because on the street, you can’t afford to get these sums wrong.

The character development of East was brilliant – very early on in the novel he witnesses a young girl die and he can’t shake her from his mind. East very much knows the life he lives and the code of the streets, so that he couldn’t idly forget this incident as a ‘casualty of war’ gave me great hope very early on that East would believe he could have a life away from “the streets.”

Ty was equally a brilliant character, and in a way, my favourite; he was the wildcard that kept me on my toes – Ty was unpredictable, followed no rules but his own, and this left me constantly wondering if he was going to cause unexpected problems for the boys. Although, I wouldn’t call Ty “likeable,” he is the perfect example of someone who, despite his young age, has the gang-life ingrained in him, the ability to pull the trigger without hesitation.

East is fifteen, Ty is thirteen, the other two boys along for the road trip aren’t much older than East – Beverly encompasses the dialogue of these boys extremely well, allowing it all to feel genuine without losing its literary feel.

While I very much enjoyed the road-trip, four boys that don’t trust each other, some more focused than others, their conversation and encounters along the way; the ending was my favourite part of the novel because Beverly completely changed the setting, he slowed things down and the reader got to see the decisions East made – is the gang life really for life?

Gritty, original, extremely well written – I highly recommend joining East on this road trip, it’s the journey of a lifetime for East and it’s destined to change him, the only question is – how?

This book is available to buy from:Amazon UK