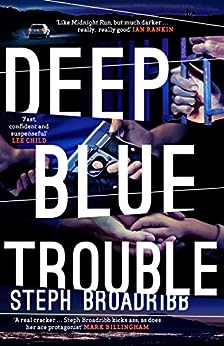 Deep Blue Trouble is the second book in the Lori Anderson series, it follows Deep Down Dead. The adrenaline rush that was DDD has me so excited to join Lori on her next adventure. The Lori Anderson short story, The Last Resort, was good, and sated my need for a little while, but I’m ready for another full length novel!

“Single-mother Florida bounty hunter Lori Anderson’s got an ocean of trouble on her hands. Her daughter Dakota is safe, but her cancer is threatening a comeback, and Lori needs JT – Dakota’s daddy and the man who taught Lori everything – alive and kicking. Problem is, he’s behind bars, and heading for death row. Desperate to save him, Lori does a deal, taking on off-the-books job from shady FBI agent Alex Monroe. Bring back on-the-run felon, Gibson ‘The Fish’ Fletcher, and JT walks free. Following Fletcher from Florida to California, Lori teams up with local bounty hunter Dez McGregor and his team. But Dez works very differently to Lori, and the tension between them threatens to put the whole job in danger. With Monroe pressuring Lori for results, the clock ticking on JT’s life, and nothing about the Fletcher case adding up, Lori’s hitting walls at every turn. But this is one job she’s got to get right, or she’ll lose everything…”

The kindle version comes sooner, but I’m waiting for the paperback, scheduled for publication in January 2018, because I just know already, this book is worthy of a space on the shelf.

#2 Force of Nature by Jane Harper

After reading and loving The Dry back in May, I can’t wait to [fictionally] travel back to Australia and join Aaron Falk in his next adventure.

“FIVE WENT OUT. FOUR CAME BACK…

Is Alice here? Did she make it? Is she safe? In the chaos, in the night, it was impossible to say which of the four had asked after Alice’s welfare. Later, when everything got worse, each would insist it had been them.

Five women reluctantly pick up their backpacks and start walking along the muddy track. Only four come out the other side.

The hike through the rugged landscape is meant to take the office colleagues out of their air-conditioned comfort zone and teach resilience and team building. At least that is what the corporate retreat website advertises.

Federal Police Agent Aaron Falk has a particularly keen interest in the whereabouts of the missing bushwalker. Alice Russell is the whistleblower in his latest case – and Alice knew secrets. About the company she worked for and the people she worked with.

Far from the hike encouraging teamwork, the women tell Falk a tale of suspicion, violence and disintegrating trust. And as he delves into the disappearance, it seems some dangers may run far deeper than anyone knew.”

Set for publication in February 2018, you can be certain, I’ll be reading this one! 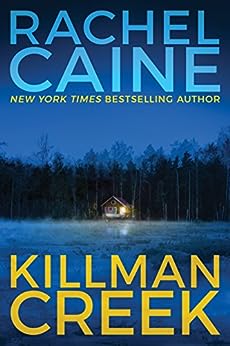 “Every time Gwen closed her eyes, she saw him in her nightmares. Now her eyes are open, and he’s not going away.

Gwen Proctor won the battle to save her kids from her ex-husband, serial killer Melvin Royal, and his league of psychotic accomplices. But the war isn’t over.“

Killman Creek releases in December so not long to wait all, although I’m thinking of making an executive decision and making this Criminally Good Book Club’s January book as we read Stillhouse Lake together last month. 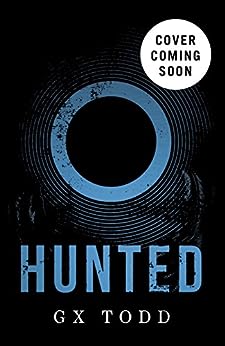 Hunted is book two in The Voices series, it follows Defender in this post-apocalyptic series, where some people hear voices and others don’t – the battle for good and evil rages on!

One man is driven by a Voice that isn’t his. It’s killing his sanity and wrestling with it over and over like a jackal with a bone. He has one goal.

To find the girl with a Voice like his own. She has no one to defend her now. The hunt is on.

But in an inn by the sea, a boy with no tongue and no Voice gathers his warriors. Albus must find Lacey . . . before the Other does. And finish the work his sister Ruby began.”

Scheduled for publication in May 2018, one is very excited! And that gives you plenty of time to read Defender!

#5 Kill the Angel by Sandrone Dazieri

I loved the complex mystery featured in book one, Kill the Father, and I’m hoping for another in book two. So I shall definitely be journeying to Rome to join Caselli and Dante in Kill the Angel.

“In Rome, a high-speed train hurtles into the city’s main station with a carriage full of dead bodies, the macabre discovery of which falls to Deputy Police Commissioner Colomba Caselli. Subsequently, the police receive a claim of responsibility and the threat of more murders to come. But neither Caselli nor her eccentrically brilliant ally, Dante Torre, are yet ready to buy the terrorist link.

As the two maverick investigators puncture the facade of what the perpetrator wants everyone to believe, they come close to dying several times.

Not for the first time, Dante’s bizarre childhood, during which he was kept confined for years in a concrete silo, enables him to see what others miss, and in this case, to connect with a kindred spirit of sorts, a woman named Giltine who experienced an equally bizarre childhood from which she emerged damaged, lethal, and full of murderous intent.

Adding to Giltine’s eerie fierceness is that, as the victim of a rare mental illness, she believes she’s already dead. She’s unacquainted with fear. And that makes her the most formidable foe Colomba and Dante have faced yet.

As the story climaxes, the duo finds themselves utterly on their own, on the outs with law enforcement and the only ones with a chance to make sure the waters of Venice don’t turn red with blood.”

Now, I’ve seen conflicting releases dates for this one, either February or May, someone please clarify! (I’m hoping February.)

I’d love to hear what you think, and also what highly anticipated books you’re waiting for?