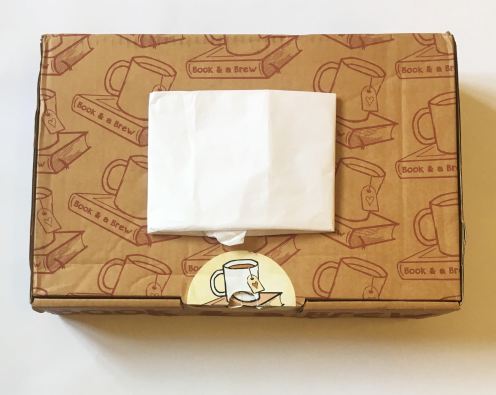 Ever since discovering Urbane Book Club, I’ve stalled in my hunt for the perfect book box, that is until I discovered Book & a Brew have started selling boxes containing some of their backlist titles. Book & a Brew is a monthly subscription book box that is perfect for book lovers who enjoy a good book and brew to go with it. I’ve had my eye on this book box for quite sometime, I’ve even purchased a single box from them on two previous occasions, and have been having this inner battle with myself on whether to subscribe or not. I purchased this box, it was not given to me in exchange for a review.

The boxes aren’t themed, each month you receive a mystery hardback book and a brew. As this was a backlist box, I knew exactly what book I’d be getting and it’s one that’s been on my wishlist forever but the brew was a surprise. 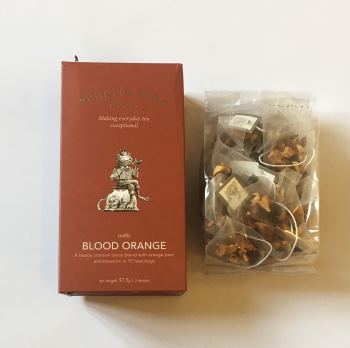 Blood Orange Tea from Prince & Sons Tea Company. A hearty crimson citrus blend with orange peel and blossom in 15 fuso bags. This tea is divine – I’ve had several cups already and it’s delicious. I was very happy with my brew. 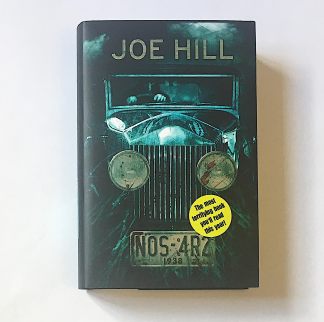 An old Silver Wraith with a frightening history. A story about one serial killer and his lingering, unfinished business.

Anyone could be next.

NOS4R2 is an old-fashioned horror novel in the best sense. Claustrophobic, gripping and terrifying, this is a story that will have you on the edge of the seat while you read, and leaving the lights on while you sleep. With the horrific tale of Charles Manx and his Silver Wraith, Joe Hill has established himself as the premiere horror and supernatural thriller writer of his generation.

As mentioned above, I got to pick the book, so it wasn’t a surprise but I think I prefer this because it guarantees it’s a book I want to and will read. I haven’t read anything by Joe Hill before and I’ve heard this is a good one! 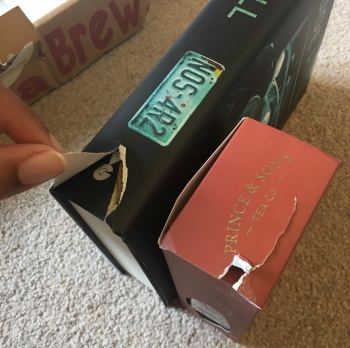 On closer inspection, I noticed the book was damaged as was the tea. I didn’t mind about the tea because I was going to open and use it away but any book lover can see how much pain is in the above picture. The hardback was ripped, and not just the dust jacket but the actual book spine itself.

I emailed Book & a Brew and they apologised and immediately sent me out a replacement book – they even included a different brew. My email was replied to within the hour and I received the new box [I think] 2 days later – I’m extremely happy with their customer service and usually an experience like this would put me off purchasing from that business again but I was so impressed with how efficiently they handled the situation that I will definitely purchase from them again. Also I have bought 2 boxes from them previously, so based on that fact, I believe this isn’t a common occurrence. The box was dented and battered when it arrived so Royal Mail, please handle our book boxes with care! 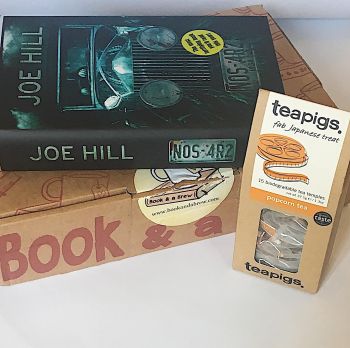 Both items reached me in excellent condition and I’m a very happy bookworm! The complimentary tea was Popcorn tea from teapigs. I haven’t opened it yet as I already have some popcorn tea – I love the subtle taste of this tea, and I’m glad to have more for when my current pack runs out.

A monthly subscriptions costs £12.99, boxes are sent out on the 15th of every month. You can also purchase/gift a one-off box for £14.99. I really like the fact you can pay for this box via paypal too. Book & a Brew is based in the UK and ship to the whole of the UK for free, they also ship to the majority of EU countries (check their website for details and shipping costs). Boxes are delivered via Royal Mail. On Book & a Brew’s website, it states that in all cases, the content of the box will cost more than the purchase price.

If you live in the UK, a select few of their backlist boxes are available from their website for £9.99. You’ll be able to select the book you want but the tea is random so it likely won’t be the tea that was featured in that month’s box.

If I was going to subscribe to a book box, it probably would be this one because of the price. They have a section on their website that allows you to see all the previous books they’ve shipped which will give you a good indicator of the books they choose. I was happy with the two books I got when I purchased from them previously, although I haven’t read them yet, my first was a crime fiction title – The Red House by Emily Winslow. This lead to me purchasing a second box and I received a fantasy novel – The Incorruptibles by John Horner Jacobs. Every month I’d check their website to see what the latest title was and the majority of the time I’d kick myself for not purchasing it. Then I saw March’s book was one I have already read and I breathed a sigh of relief. But of the 34 titles they’ve sent out so far, I have only owned one of them – those are pretty good odds!

So why haven’t I subscribed, on my last visit to their website, I saw they had introduced the backlist featured where you’re able to buy past boxes for £9.99 and I like that option better. Granted, there’s no guarantee there will be any boxes left over so you may miss out on several book but I like the idea of knowing 100% I’m going to be happy with the book – And lets be honest £9.99 is better than £12.99! So for now, I’ll continue visiting their website each month and who knows what the future holds…

Is this box worth its buck, I’ve unboxed it, let me know what you think?

More information about Book & a Brew can be found at: