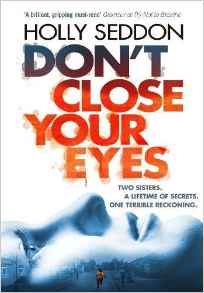 I had it on good authority that Holly Seddon’s debut novel, Try Not To Breathe, was fantastic so I was excited when I was given the opportunity to read Don’t Close Your Eyes. If you’re a fan of books featuring twins, this is another one to add to your reading list.

Robin and Sarah weren’t the closest of twins. They weren’t even that similar. But they loved each other dearly. Until, in the cruellest of domestic twists, they were taken from one another.

Now, in her early 30s, Robin lives alone. Agoraphobic and suffering from panic attacks, she spends her days pacing the rooms of her house. The rest of the time she watches – watches the street, the houses, the neighbours. Until one day, she sees something she shouldn’t…

And Sarah? Sarah got what she wanted – the good-looking man, the beautiful baby, the perfect home. But she’s just been accused of the most terrible thing of all. She can’t be around her new family until she has come to terms with something that happened a long time ago. And to do that, she needs to track down her twin sister.

But Sarah isn’t the only person looking for Robin. As their paths intersect, something dangerous is set in motion, leading Robin and Sarah to fight for much more than their relationship…

Told in alternating chapters between twins, Robin and Sarah, and an alternating timeline between the present day and the past, Don’t Close Your Eyes is a gripping psychological thriller. Coupled with its extremely short chapters, this novel has that ‘just one more chapter’ feeling, allowing you to devour this story.

Both Robin and Sarah were interesting characters, and I know you shouldn’t pick favourites when it comes to twins but… Robin was easily my favourite and I enjoyed her storyline in the present day the most. Seddon wrote a great storyline for Robin, Seddon used Robins one location, her house, and gripped me alone with Robin’s time spent people-watching, and despite being agoraphobic, Robin had the ability to meddle from afar.

Regarding the childhood narratives, it was indeed one of the cruellest things – to separate the twins. Again, I preferred Robins childhood trauma to Sarah’s, and that’s because I saw Sarah’s trauma coming a mile away – it was so predictable it felt as though it was written to be figured out and it was a case of what’s the aftermath going to be as opposed to ‘the reveal’ itself.

There was a good sublot running throughout the novel that I really enjoyed, featuring Callum, the twins ‘step-brother’, although these events impacted both twins, they were more linked to Robin, again making, for me, Robin’s storyline the most interesting.

Sarah, as an adult, did have an interesting storyline but I found parts of it predictable. Even though I was unable to guess the twist I was underwhelmed by it, so, by default I was underwhelmed with the ending of the book. There was nothing wrong with its delivery but I guess when you read so many psychological thrillers, it becomes harder to shock you. Although I was underwhelmed, I’d still recommend this book for its ‘page-turner’ ability – I do suspect I flew through this one because I kept wanting to get back to Robin’s story. Nonetheless, this is a good psychological thriller and an author I’d read more from.