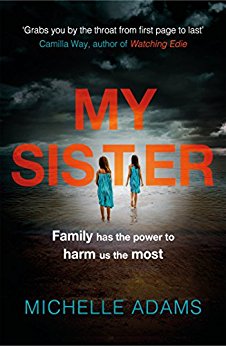 This is another example of FOMO being a good thing – initially, I overlooked My Sister because I wasn’t a huge fan of the cover but once the reviews started emerging, I HAD to read it…

My name is Irini. I was given away.

My name is Elle. I was kept.

All her life Irini thought she was given away because her family didn’t want her. What if the truth is something worse?

One family bound by a harrowing secret.

My Sister is an addictive read – I couldn’t predict where the plot was going and that keep me gripped, which is just want you want in a book nearing 400 pages. I won’t offer up any more about what happens in the story as it’s the intrigue about the family’s secret and the lives of the two sisters that make this book what it is and to tell you anymore I risk spoilers.

I loved the sinister feel this novel had throughout, that unsettling feeling, like something dark is coming. This theme came through much stronger than I thought it would and it was great! Coupled with themes of family ties, secrets and lies, Adams really puts the emphasis on the psychological in this one. There wasn’t a fast-pace to the events unfolding in this one, and that really allowed Adams to focus on the psychological factors in this read. The entire novel moves at the same steady pace with this undercurrent of dark suspense that is pulling you deeper into the plot.

Adams offers you an insight in to the minds of Elle and Irini to justify their actions whilst showing how deeply events from their childhood affected them both in different ways. There were a few times I felt Irini should just walk away (but where is the fun in that), it was almost like she was asking for trouble but Adams did a wonderful job portraying just how strong the pull between the sisters was and this allowed the plot to remain believable. Elle and Irini were both great characters, if a little odd, but they were well developed and as the novel progressed you got to know them really well – even if you couldn’t one hundred percent understand their actions.

There were a few minor twists along the way but the most shocking was definitely the final one, it came straight out of left-field but it made it made so much sense, you’re almost kicking yourself for not seeing it sooner. The ending isn’t all wrapped up neatly in a bow, but you’re given enough to feel, in equal measures, fulfilled and wanting more.

If I was going to zone in on the one thing that shone for me in this book, it would have to be the creepy, sinister atmosphere so if you enjoy books of a dark and unsettling nature, I recommend you give My Sister a read.

18 thoughts on “Book Review: My Sister by Michelle Adams”