Welcome to my stop on the blog tour for Vile City, the first book in a new crime series featuring DI Duncan Waddell.

Three women have gone missing in the city he’s fast coming to despise, victims of the GLASGOW

GRABBER as their assailant has been dubbed by local hack and all round pain in the backside, Catriona Hastie.

Shelley Craig’s the Grabber’s latest victim, snatched as she and her boyfriend took a shortcut through Glasgow city centre. And she’ll do anything to make it home.

Handling this baffling case is stressful enough without Waddell’s pal DC Stevie Campbell, who’s in a coma after being attacked by a suspect, starting to talk to him. Trouble is, only Waddell can hear him.

Vile City is a book that gets better and better as the plot develops. When Shelley first goes missing and I saw the direction the plot was heading in, I was worried as it’s an idea I’ve seen played out before, but before my interest could dip, Thomson took this storyline in a whole new direction and had me gripped to the pages. What I first thought was going to be a simple case turned out to be more complex than I could have imagined! Even when arrests had been made and the CPS were sure they could get a conviction, it’s not the end… While I mentioned earlier, this isn’t a new kind of case, it’s the most realistic portrayal I’ve seen of it and I love how the author took this idea and made it her own – leading you in one direction, only to add another layer to the plot and take you somewhere else. If you’re someone who’s good at guessing ‘who dunit’, then this is the book to test yourself with, because you will have to guess, then guess again and then guess again, that’s the cleverness of this plot.

Regarding the characters, I loved Shelley’s determination to survive, to not see herself as a victim and fight till the very end – who doesn’t love a strong female character!? DI Duncan Waddell is a likeable character and I enjoyed the use of humour throughout. And what an interesting side story of him hearing his colleague, who’s in a coma, talking to him. I wonder if in following books, we’re going to see the detective lose touch with reality and possibly jeopardise a case? There’s a good range of characters in Vile City, plenty to like and dislike, there’s even a sociopath – hmm, that perhaps shouldn’t have excited me as much as it did, but you must admit, they are fascinating.

Thomson also used another device I liked, and that was to incorporate smoothly into the plot the backstory of some of the characters, how they came to be caught up in this complex case; showing just how well thought-out the characters were.

With dark and disturbing themes, a gripping and clever plot, and a brilliant ending, Vile City is a welcome addition to the family of crime thriller series. When you enjoy a book, it’s always good to know the author has already penned books two and three and is currently working on book four; I highly recommend you get on board with this series now, so you don’t have to play catch up later.

Jennifer Lee Thomson is an award-winning crime writer who has been scribbling away all her life. She also writes non-fiction as Jennifer Thomson and fiction as Jenny Thomson.

This is her first book as Jennifer Lee Thomson in tribute to her late father who passed away after a long battle with cancer. Books 2 and 3 in the series are already written and she’s working on book 4.

Jennifer is an animal rights and human rights advocate and has a rescue dog. She also writes the Crime File series of books as Jenny Thomson. Book 1, 2 and 3, are out now. They are in order, Hell to Pay, Throwaways and Don’t Come For Me and feature tough rape survivor Nancy Kerr and her ex-Special Forces boyfriend who fight crime together. In her spare time, she plans how to survive the zombie apocalypse. 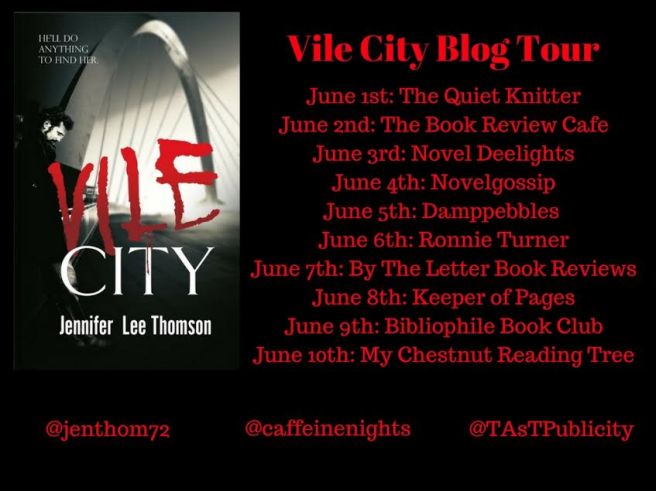