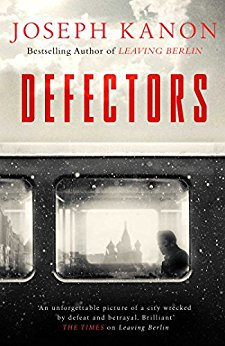 Some secrets should never be told.

Moscow, 1961: With the launch of Sputnik, the Soviet Union’s international prestige is at an all-time high. And the most notorious of the defectors to the Soviet Union, former CIA agent Frank Weeks, is about to publish his memoirs. What he reveals will send shock waves through the West. Weeks’ defection in the early 1950s shook Washington to its core – and forced the resignation of his brother, Simon, from the State Department.

Simon, now a publisher in New York, is given the opportunity to read and publish his brother’s memoir. He knows the US government will never approve the publication of what is clearly intended as KGB propaganda. Yet the offer is irresistible: it will finally give him the chance to learn why his brother chose to betray his country.

In Defectors, loyalty to ‘the cause’ is stronger than the loyalty between brothers. After Frank Weeks defected, he’s now about to publish his memoir and that sees him reunited with his brother, Simon. The relationship between the two brothers is rocky to say the least, but as they spend time together and reminisce about their childhood and the mistakes of their past, you begin to wonder if their brotherly bond can be repaired when Frank makes a surprising proposal…

My knowledge of Moscow in 1961 is zero to none, I know zilch about the KGB and before reading this book I didn’t even know what defecting was. And you’ll be happy to know, none of that affected my enjoyment of this book, in fact it made it all the more enjoyable because not only did I learn something but I am now fascinated with what motivates someone to defect.

Marked as an intelligent thriller, I like to use the term ‘silent thriller’, there isn’t heaps of action and events move quite slow at times but the thrill is there, in the silent suspense – can Simon trust Frank as he reveals his plans? At times, I thought the pace of the story was extremely slow and it seemed like nothing was happening at all, but like a spy [shh, I believe I have the necessary skills to be a spy], I learned to look for clues in these quiet moments, and despite my skills of detection, I still wasn’t able to predict the clever way this story ended. Now I see why this is referred to as an intelligent thriller, what a clever plot twist.

I liked that Frank’s wife was incorporated into the story and we see how Franks actions affected her, both in the past and the present. Defectors has a little emotional thread to it too as you see a family pushed to its limits due to lies, secrets, betrayal, and more secrets. This feeling is heightened as at times Frank appears quite cold and this causes you to become even more suspicious of his end game.

Kanon added a thick emotional layer to this spy novel that shows that you don’t always need a fast pace and a ton of action to captivate the reader.