It’s time to unwrap another monthly offering from Urbane Publications, it’s April’s box aka APRIL SHOWERS – IT’S RAINING BOOKS! I’m a very happy bookworm after unwrapping these books so no more chit chat, let’s get right to it… (see if you can spot the one book I likely won’t read)

New York 1936. Leading New York detective Simon Finch has received an unexpected inheritance and left the force to pursue his dream of becoming a writer. But a true detective is never far from finding trouble…or trouble finding him… A stranger approaches Finch in the Algonquin Hotel, asking him to help find his sister who has disappeared. When he later visits the man’s hotel room he discovers that he has been murdered – stabbed with a dagger decorated with strange markings. As Finch investigates further he discovers recently acquitted crime boss Fats Molloy is mixed up with the man’s murder and the missing sister. The trail leads him to an occult bookshop …has the missing woman been kidnapped by a group of Satanists, The Scarlet Coven? Joining forces with a black private eye, Patrick Murphy, who is also investigating the cult, they endure a series of wild adventures and close calls with demonic forces as they seek the truth about the mysterious leader of the Coven…and the nefarious plans for death and mayhem…

The Prague Ultimatum by James Silvester 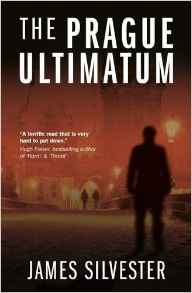 Fear stalks the newly reunified Czechoslovakia, the terror wrought by international terrorism and violent extremists overshadowing the forthcoming fiftieth anniversary of the Prague Spring, and threatening to burn the country in its wake. Into this arena steps Captain Lincoln Stone, a disgraced British officer, humiliatingly scapegoated by his government for his role in the disastrous on-going Syrian Conflict. Plucked from his purgatory, Stone is teased with exoneration by British Foreign Secretary Jonathan Greyson, in return for his ‘off the books’ aid of Czechoslovak Prime Minister, Miroslava Svobodova. Stone, resentful of his treatment and determined to prove himself, is driven by deeper motives than the casual platitudes of his superiors, and finds himself at the epicentre as the country descends into chaos. Cut off from the international community and isolated in the face of an expansionist Russia, and with the sinister Institute for European Harmony ever present behind the scenes, Czechoslovakia’s fate, and that of the world, hangs on the outcome to the Prague Ultimatum.

Burning Secrets is book 2 in the Scottish Mysteries series.
Strontian, a village on Ardnamurchan Peninsula, is inhabited by mining folk and crofters, eking out a living from the unforgiving land and turning a blind eye to the smugglers who plague the coast.
A bag of bones is pulled out of the water; the assistant to Gustav Wengler, eccentric owner of the lead mines, is brutally murdered; what is the connection? And what do either have to do with the sundial in Ockle churchyard and the collection of monuments on Wengler’s island known locally as the White Cathedral?
Sholto McKay and Brogar Finn of the Pan-European Mining Company – in pursuit of a potentially valuable mineral from the Strontian mines – begin their own investigations, unaware their discoveries will tear more than one life apart.
Burning Secrets, from acclaimed historical fiction writer Clio Gray, will keep you gripped to the very last page.

The Melting Point of the title refers to a critical psychological threshold that all of us face when under massive stress and pressure the point at which we cannot control our thinking, emotions, and behaviors in an impactful way anymore. We start to internally derail, show dysfunctional behaviors, and perhaps even walk away.
Dr. Marcolli discusses how leaders can achieve sustainable top performance by raising their Melting Point so they can successfully handle the enormous pressures of today s demanding commercial environment. This, in turn, enables them to maintain a winning edge in their career, lead their team effectively, and deliver tangible long-term benefits to their organization, especially in highly competitive times.

The Rock by Robert Daws 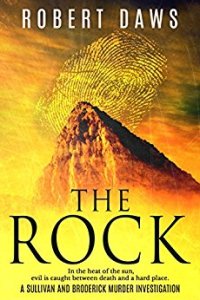 The Rock. Gibraltar. 1966.
In a fading colonial house overlooking the Straits of Gibraltar, the dead body of a beautiful woman lays dripping in blood. The steel handle of a knife protrudes from her chest, its sharpened tip buried deep within her heart.
The Rock. Present day.
Detective Sergeant Tamara Sullivan arrives on The Rock on a three-month secondment from the London Metropolitan Police Service. Her reasons for being here are not happy ones and she braces herself for a tedious and wasteful twelve weeks in the sun.
After all, murders are rare on the small, prosperous and sun-kissed sovereignty of Gibraltar and catching murderers is what Sullivan does best.
It is a talent she shares with her new boss, Chief Inspector Gus Broderick of the Royal Gibraltar Police Force. He’s an old-fashioned cop who regards his new colleague with mild disdain.
But when a young police constable is found hanging from the ceiling of his apartment, Sullivan and Broderick begin to unravel a dark and dangerous secret that will test their skills and working relationship to the limit.

The Poisoned Rock by Robert Daws 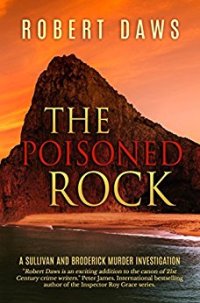 With only five weeks to go before the end of her secondment to the Royal Gibraltar Police Force, D.S. Tamara Sullivan is enjoying life on the Rock. With one murder investigation successfully under their belts, Sullivan and her commanding officer, Chief Inspector Gus Broderick, settle down to regular police work under the sunny Mediterranean skies.
In London, the British Government has declassified a large number of top secret files regarding British Military Intelligence operations during World War Two. One file, concerning espionage operations on Gibraltar, has been smuggled out of the U.K. to Spain. It contains information that will draw Sullivan and Broderick into the dark and treacherous world of wartime Gibraltar. A place where saboteurs and espionage plots abounded. Where double and triple agents from Britain, Germany and Spain were at war in a treacherous and deadly game of undercover operations.
As the summer heat reaches its zenith in Gibraltar Town, a film crew has arrived on the Rock to shoot a movie about one of the most enigmatic and legendary spies of the war years – ‘The Queen of Diamonds’. Starring Hollywood A-lister Julia Novacs and produced by local born film maker, Gabriel Isolde, it is the talk of the Rock.
It is only a matter of time before past and present collide and a dangerous battle begins to conceal the truth about the Rock’s poisonous wartime history. Detectives Sullivan and Broderick become caught in a tangled web of intrigue and murder that will once again test their skills and working relationship to the very limit.

If you’re interested in joining Urbane Book Club, all the information you need to know can be found here.