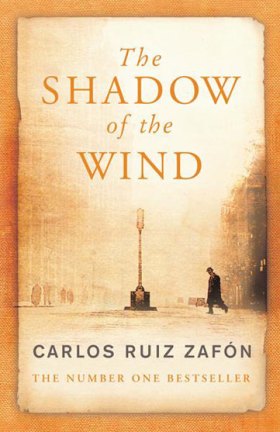 This year Babbling Book Club aims to read the world, and I decided to join them [fictionally] in Spain to read The Shadow of the Wind. This book has been on my radar for quite some time; a literary thriller with a lovely blend of mystery and historical fiction.

From the back cover:

Hidden in the heart of the old city of Barcelona is the ‘Cemetery of Forgotten Books’, a labyrinthine library of obscure and forgotten titles. To this library, a man brings his ten-year-old son, Daniel, one cold morning in 1945. Daniel is allowed to choose one book from the dusty shelves pulls ‘The Shadow of the Wind’ by Julian Carax. But as Daniel grows up, several people seem inordinately interested in his find. What begins as a case of literary curiosity turns into a race to find out the truth behind the life and death of Julian Carax and to save those he left behind.

Set in the streets of Barcelona, the setting and the time period created an eerie, gothic atmosphere throughout the entire read, similar to the haunting atmosphere I have come to love in noir. I was waiting for this story to rip my heart out – a book about books, a bibliophile’s dream.

“Books are mirrors – you only see in them what you already have inside you.”

To elaborate too much on the above description would indeed spoil the read, The Shadow of the Wind, crossing genres, part romance, part historical fiction, part mystery, part literary thriller, part adventure, this slow burning tale is a stunning showcase of Zafón’s almost poetic writing style. In small doses, Zafón lets slip the secrets of the past and those of the present, in a way that captivates the audience. The plot isn’t action-packed, for me, it’s success lies more in Zafón’s beautiful writing style rather than the plot itself.

“In the shop we buy and sell them, but in truth books have no owner. Every book you see here has been somebody’s best friend.”

This story, rich in descriptive detail, allows you to visualise it as much as read it. However, there were times when I thought the pace-slowed a little too much, not in a way that discouraged me from wanting to continue but it just meant when a new piece of information was revealed, it didn’t awe me the way it was, perhaps, meant to. All the characters were extremely well developed, some you grow to love and some you grow to hate.

My favourite part of this story was the mystery surrounding Julian Carax, this was what pulled me into the story, my desire to know what happened to this young author, in life and in death. It was almost as though certain elements of Daniel’s life, throughout his search, were echoing that of Carax’s life and that really interested me as it left me constantly wondering if not only was Daniel uncovering the mystery of Carax but also discovering and sealing his own fate.

There were several subplots alongside this mystery that, for me, just served to strengthen what we all already know, the past lays the foundation for the future. It also shows how the characters, in their own strange ways, are linked. However, these didn’t grip me the way I’d hoped, instead, they were a further showcase of Zafón’s writing. Which is not a bad thing, I guess the point I’m trying to make is, the plot does not lack substance, it was just out-shined by the writing. Lucia Graves did a wonderful job translating this book but I can’t help but wonder how much more powerful the writing and story would have been, had I been able to read it in Spanish.

So, while I am now firmly a fan of Zafón’s writing style, did The Shadow of the Wind rip my heart out? Sadly, no – I loved the writing style, but it didn’t create the emotion, I was expecting, I was expecting emotion on the same level as when I read The Book Thief, and that was not the case. Maybe, I set my expectation to high… Don’t get me wrong, it is beautifully written and I highly recommend it, a solid four star read and I will, for certain, read book two.

This book is available to buy now from: Amazon UK

20 thoughts on “Book Review: The Shadow of the Wind by Carlos Ruiz Zafón”