Another month, another fantastic Urbane box full of books! When I received last month’s box, I wasn’t sure if they arrived a month in arrears, I can now confirm, they do – so while I received this box a few days ago, it is March’s box aka MARVELLOUS MARCH! And what a fab selection of books, one in particular that was already on my wish-list, Imperfection by Ray Clark. Of the 6 books received, there’s only one that I likely won’t read (see if you can guess which), so without further delay, let’s take a look at Urbane Book Club’s March offerings…

Imperfection is a new crime series featuring D.I. Stewart Gardener and D. S. Sean Reilly, and set in the West Yorkshire city of Leeds. A haunting message scrawled on the dressing room wall of a theatre: the scene of a murder. It had been written using the blood from the victim, previously drained in a separate location. At the autopsy, D.I. Gardener and D.S. Reilly are shown a riddle carved into the chest of the corpse, informing them there would be more. Their efforts to find out why are continually blocked by a wall of contradiction, with little in the way of evidence to support their cause. Steered back to the scene of the crime and a disused prop room, Gardener and his trusted sergeant find another puzzle. The murderer, it seems, is playing games. It soon becomes clear to Gardener and Reilly that to find the killer they need to solve the clues, and to do that, they must tunnel their way into the past, where the streets were paved with gold, and to a man who had terrified people before either of them had even been born…

The Knowing by David Graham

‘No witches were burnt in the writing of this tale, although the Queen was a little singed at the edges.’ Ceri Edwards and two school friends lift the lid on an ancient book of recipes belonging to Betty Williams, a volunteer at the local hospital in Pontypridd, South Wales. Two Kansas City cops step off a flight at London Heathrow and one of them falls to the ground with a painful conviction that there’s something evil in the air. United in their destinies, Ceri and the police officers are drawn into a world where prophecies are pitted against invisible forces planning to raze London to the ground and bring down the Royal Family. It all rests with Dai Williams, recently knighted MI5 agent and reluctant hero, to bring some order to the improbable events and to ensure that afternoon tea at The Ritz continues for another hundred years. A great cross between Kim Newman and Ben Aaranovitch and a thrill for any fan of contemporary urban horror.

Ireland’s gone bust, and with it Aisling Finn’s life. She flees austerity for adventure in the desert. But the Arabia she finds is not that of her dreams. Everyone is chasing a fast buck, a fast woman and another G&T. Expats and locals alike prickle with paranoia. Debonair fixer, Brian Rothmann, charms Aisling with champagne brunches and nights at Bedouin camps. But is Brian a hero or a desperate expat prepared to go to any lengths to get what he wants? Is this Aisling? Or is he using her as bait? Her only hope is Hisham, a local activist. But where do his loyalties lie? Aisling faces severe peril when the sleazy expat and blood-lusting desert worlds collide, as the Arab Spring erupts. She has to ask, whom can she trust? Can she trust her instincts? Humanity blisters in this haunting, lyrical thriller about trust and treachery.

A Monster by Violet by Laura Wake

Twenty-one year old Violet Kale has fallen out of love with life. A dissolute figure she drifts along with her friend Lisa (mother of a baby daughter Maria), reluctant to take responsibility for anything except her own pleasure. When Violet wakes up after a 3-day drug and alcohol binge to the sound of her friend’s baby Maria crying with hunger, on a whim she steals Maria away, heading on a journey to a new land, and seeing in the child a chance of a new future, and a hope for salvation…

Marching on Together by PJ Whiteley 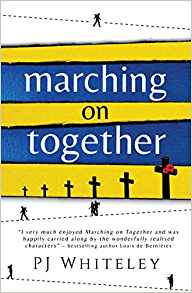 It is August 2014. Six Leeds United supporters set off for a short break in Bruges. Two brothers Allan and Johnny Collins – the former a successful businessman, the latter just out of prison – are visiting great-grandad’s grave on the Western Front, at the time of the centenary of the start of the Great War. They’re joined by Johnny’s mates, Craig and Terry; the tomboy Petra; and the out-of-sorts Yvonne, who failed to persuade estranged husband Tony to accompany her. For all the political events, historic and current, that surround them, they find it difficult to avoid discussion of the wildly eccentric new owner of their beloved football club as it languishes in the second tier of English football. He has sold the best striker and banned the Number 17 shirt as being ‘unlucky’. Meanwhile other obsessions, secrets and ambitions lie within their hearts. Can Johnny find love again, or a job? Will Terry make it as a photographer? Is Allan’s business as successful as it appears to be? What is the family secret behind the antique silver locket that Yvonne keeps in her handbag? And can she finally accept the result of the 1975 European Cup Final, and begin to move on with her life?

An Actor’s Life for Me by Zoe Cunningham

So you want to be an actor? Here is the essential and valuable advice you need to achieve your creative ambitions … WITHOUT having to give up the day job … WITHOUT taking a HUGE loan … WITHOUT having to commit three years of your life to go to drama school … and WITHOUT risking facing a life of penury and rejection. Zoe Cunningham shows you how you can kickstart your acting career today. Writing from hard-earned experience, and packed with interviews and top tips from contemporary actors, directors and agents, this book is your first successful step in achieving your acting ambitions. From theatre, to stage, to film and television, Zoe covers everything from initial training, methods to gain valuable experience, and on to securing an audition. The ultimate aim? To help you be selected for your first acting role!

If you’re interested in joining Urbane Book Club, all the information you need to know can be found here.