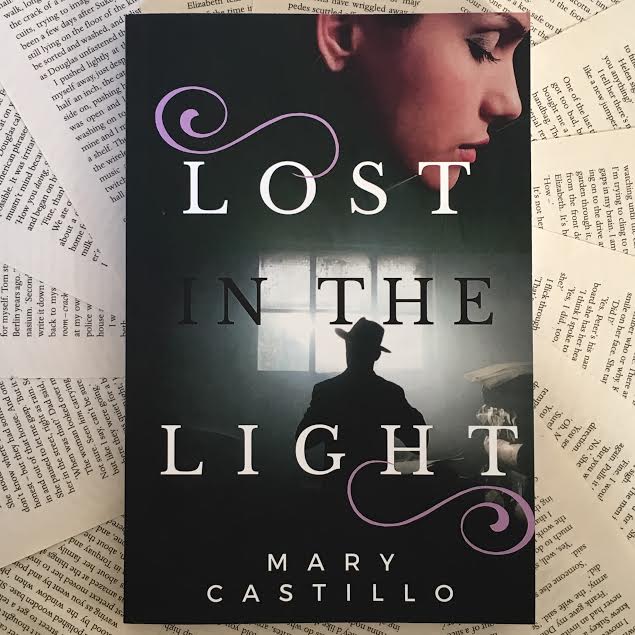 I’ve not read a huge number of paranormal mysteries but Lost in the Light embodies all that I’d want in one. A great read that is a worthy nominee for the Daphne du Maurier Award for Excellence in Paranormal/Mystery Suspense.

From the back cover:

The dead are waiting

One October morning in 1932, Vicente Sorolla entered the white house on the hill and was never seen again.

Drawn to this tough but tender woman, Vicente materializes out of the butler’s pantry and asks her to find his lost love, Anna. Dori wonders if she’s not only about to lose her badge, but also her sanity.

Dori has always been drawn to the mysterious Queen Anne Edwardian house in her hometown. But after a devastating injury that puts her career on the line, Dori isn’t sure if she made the right decision purchasing this rundown old mansion.

Her wisecracking Grammy Cena has waited too long for her independent granddaughter to return home. She hires a kooky psychic to banish the ghost and a handsome contractor with whom Dori has an unhappy past.

With a promise to Vicente, Dori may solve a forgotten Prohibition era murder. Or she may exhume secrets someone died to protect.

Dori is on leave from her job as a police officer, after being involved in a shooting, as she struggles to overcome her emotional trauma, she plans to focus her efforts on restoring her newly bought gothic style mansion. Seven pages in the eeriness begins when the ghost of Vicente makes his first appearance.

Vicente wants Dori to find out what happened to Anna, his true love. Told in the present day and flashbacks to the Prohibition during the 1920/30’s, Dori learns of Vicente’s untimely demise and attempts to find out what became of Anna.

Some of the books I have read previously have had paranormal elements, to read a book ridden with it was a pleasure. I enjoyed the eeriness, it wasn’t horror in the sense that it was scary, but in a way that made me want to read on and learn more about Vicente. Midway through the book, I began really looking forward to the lights switching off by themselves or the windows rattling as that meant the return of Vicente.

Castillo has created a great cast of characters.  Dori, the main character, is so likeable, you immediately warm to her. But her Grammy Cena stole the show, she added lovely elements of humour throughout the book. I hope Castillo won’t mind if I share with you my favourite scene in which Grammy made me laugh out loud…

“Did you bring your cell phone?” Dori ordered, reaching for her off-duty weapon.

“Damn girl, what you packing?”

Grammy pointed to the Smith and Wesson M&P9 in Dori’s holster.

When Grammy didn’t answer, Dori turned to see her pulling a chrome-plated piece out of her purse. “Your Grammy don’t bring no damn cell phone to a fight.”

These injections of humour were so entertaining and very much appreciated.

This book is described as “a modern gothic mystery woven with suspense, ghosts and romance.” I’d replace the word ‘romance’ with the word ‘history’ as this book definitely contains some historical fiction. I’m not a fan of romance so trust me when I say the romance in this book is minimal, it’s the necessary amount for the storyline – there’s no great love/romance scenes. I do believe this book would appeal to readers of all genres (unless you’re not a fan of paranormal mysteries) – I highly recommend it.

I’m surprised by how much I enjoyed this book, I was engaged and gripped throughout. Castillo has a lovely writing style and I look forward to more paranormal mysteries from her.

My only criticism is that some parts of this book were poorly edited, this took away from the story in certain parts as it disrupted the flow.

I also want to mention something about the book’s cover…. it’s gorgeous, I believe the correct term is ‘cover-love’ – I had so much fun taking pictures of this one for bookstagram!

Mary Castillo, Amazon Bestselling Author of Paranormal Mystery, lives in Orange County, California with her family and black pug name Rocky. More about Mary, her books and her podcast, can be found at:

5 thoughts on “Book Review: Lost in the Light by Mary Castillo”

#Fantasy⁣ But a different kind of fantasy to what I’m used to! Usually my fantasy reads involve dragons, swords and battles.⁣ ⁣ The Belles by Dhonielle Clayton [gifted by @gollancz] is set in a world where the Belles control beauty, they can make you ‘perfect’. But beauty has a price. What would you give to be beautiful?⁣ ⁣ I’m half way through this one, and I’m loving it. It’s a different worldbuilding to what I’m used to but I’m all for it. The plot is just heating up, like some twisted fairy tale of a desire for perfection but you just know it’s going to come at a great cost!⁣ ⁣ QOTD: what’s the last book you read that was outside your norm? Or do you remain within your comfort reading zone? . . . . #bookstagram #currentlyreading #thebelles #dhonielleclayton #fantasybooks #bookstagrammer #keeperofpages #bibliophilelife #diversereads #bookreviewer
..⁣ February: A backlist book of an author you have read before.⁣ ⁣ Book 1: The Unseeing by Anna Mozzola⁣ ⁣ Set in London in 1837, Sarah Gale, a seamstress and mother, sentenced to hang for her role in the murder of Hannah Brown. During her petition for mercy, Sarah remains silent. Why, what is she willing to die for?⁣ ⁣ (Previously read The Story Keeper)⁣ ➖⁣ Book 2: The Good People by Hannah Kent⁣ ⁣ County Kerry, Ireland, 1825.⁣ Nóra, bereft after the sudden death of her beloved husband, finds herself alone and caring for her young grandson Micheál. Micheál cannot speak and cannot walk and Nóra is desperate to know what is wrong with him. What happened to the healthy, happy grandson she met when her daughter was still alive? In the hope of restoring Micheál, the world of folklore and belief, of ritual and stories, lead her down a dangerous path.⁣ ⁣ (Previously read Burial Rites)⁣ ➖⁣ Both books are based on/inspired by true stories, both emotionally engaging and well thought out. The Good People is slow in pace, but worth your time, and I was surprised by how emotional I was at the end of reading. The Unseeing is perfect for historical crime fiction fans, an addictive read.⁣ ➖⁣ #jesandrosiesbooketlist hosted by @jesikasbookshelf & @rosie_tinted_books
#bookstagram, you all know how much I love a #readalong, so what better way to start off February than with one 😃 Over the next 4 days I’ll be reading The Poison Garden by Alex Marwood with the lovely #bookstagrammers tagged in the photo!⁣ ⁣ I really enjoyed Marwood’s previous book, The Wicked Girls, so I’m excited for this one - I’m already 100 pages in and hooked!⁣ ⁣ Romy has escaped a cult, but can she escape her dark past!⁣ ⁣ #ThePoisonGarden is out already, so if you have a copy, let me know and do join in! The schedule we’re reading to is:⁣ 1st Feb - start to page 100⁣ 2nd Feb - page 101 to 203⁣ 3rd Feb - page 204 to 287⁣ 4th Feb - page 288 to the end.⁣ ⁣ Thank you to @tandemcollectiveuk for sending me a copy of this book and organising the readalong!⁣ #ThePoisonGardenReadalong
Girl, Woman, Other⁣⁣ I’m closing January by finishing this beauty.⁣ GWO follows a cast of twelve characters -mostly Black British women- on their personal journeys. ⁣⁣ Bernardine Evaristo has written such a readable book, with its unique structure, it just flows. Yet the distinction between each character’s voice is clear, without altering the fluidity of the read.⁣⁣ ⁣⁣ I really like the links between the characters. Some are more personally relatable than others (so were my fav - Carole and LaTisha), however, I haven’t come across any character who I haven’t enjoyed reading about. I may not find them likeable but I remain interested.⁣⁣ ⁣⁣ Do you ever “people watch”. You see someone and wonder what their life is like. I think this book is a bit like that, almost as though people in the street have stopped and shared a bit of themselves and then we move onto the next person. To the extent where their pain/trauma isn’t fully explore, nor their successes, you just get the essence of who they are. The idea that you don’t know what the next person has experienced/is experiencing.⁣⁣ ⁣⁣ How happy am I that I have another of Evaristo’s books on my shelf, waiting for me to get lost in!⁣⁣
To all those people who said stick with The Dark Tower series, don’t judge it by book one, it gets so much better - you all were right!!!!!⁣ ⁣ The Drawing of the Three was so much better than The Gunslinger. Although I suspect there’s so much more to come with this series - still five books left to go! And I’m loving this journey with my #KeeperOfKing crew!!⁣ ⁣ Having now finished book two, I see how The Gunslinger laid the foundation, and I now appreciate it more!⁣ ⁣ My evening plans: to start book three - The Waste Lands.⁣ ⁣ QOTD: what book are you reading this evening?
..⁣⁣ ‘It’s not a community.⁣⁣ It’s a conspiracy.’⁣⁣ ⁣⁣ Wolfhunter River by Rachel Caine.⁣⁣ ⁣⁣ I love the fast-paced, over the top, intense action this series book (and series) delivers! I love the main characters, I’m behind them 100%, they’ve been through the wars, and every time I’m rooting for them to come out the other side! This really is one for crime thrillers fans!⁣⁣ ⁣⁣ In this instalment, Gwen Proctor is still being hounded by vigilantes seeking to avenge her ex-husbands crimes. A threatened woman, from Wolfhunter River, reaches out to Gwen for help, and Gwen is about to find out just how small, and deadly, this small town (with an awesome name) is!⁣⁣ ⁣⁣ I read this one right on time too, because the next in the series, publishes tomorrow. And I was smart enough to preorder it - win!⁣⁣ ⁣⁣ Have you read this series? Are you planning to? If you’re interested, the series in order is:⁣⁣ ⁣⁣ 1. Stillhouse Lake⁣⁣ 2. Killman Creek⁣⁣ 3. Wolfhunter River⁣⁣ 4. Bitter Falls⁣ 5. Heartbreak Bay (2021)
My Tweets