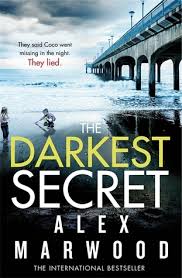 Read pre-blog  but so enjoyable, it needed a feature (review originally posted on Goodreads in August 2016).

Apologies for the general email, but I desperately need your help.

My goddaughter, Coco Jackson, disappeared from her family’s holiday home in Bournemouth on the night of Sunday/Monday August 29/30th, the bank holiday weekend just gone. Coco is three years old.

When identical twin Coco goes missing during a family celebration, there is a media frenzy. Her parents are rich and influential, as are the friends they were with at their holiday home by the sea.

But what really happened to Coco?

Wow talk about an emotional read. After thoroughly enjoying The Wicked Girls by Alex Marwood, I had to pick this one up; this book is not as fast-paced but it is equally as brilliant.

It took me a little while to get into this story due to the way it’s told – the chronology switched between two weekends, 12 years apart and is told from multiple viewpoints. Once I got the gist of this, I was able to really enjoy this slow-paced yet deeply disturbing mystery.

Disturbing in the sense that during the course of this read you encounter some of the most narcissistic, inhumane, god-awful characters, that have little to no regard for anyone’s lives but their own.

As Marwood slowly reveals the events that led to Coco’s disappearance, she is simultaneously tearing at your heartstrings – the only two characters I felt anything other than hatred towards were Camilla and Ruby (two of Sean’s daughters, Sean being one of the despicable adults), the outrage that these poor children were, through no fault of their own, tied to these awful, hateful adults.

It’s hard to talk about the plot without giving anything away but this is a cleverly thought out storyline, Marwood takes you on a journey of the lies and deceit of some of the most loathsome characters you will ever meet in fiction.

This book is available to buy now from: Amazon UK

5 thoughts on “Book Review: The Darkest Secret by Alex Marwood”

Oh #bookish gods⁣
What’s one of your recent #bookish achievements?⁣
“You may not be able to judge a book by its cover, but you can certainly judge a person by their books.” - True or False?⁣
⭐️ Book Feature ⭐️⁣
🎧 📖⁣⁣
📖 ⁣
My Tweets